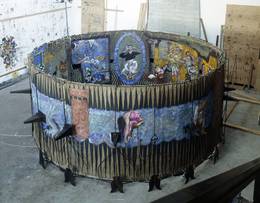 Gérard Garouste born in Paris, where he is educated.
However, he spends his holidays in Burgundy, where he stays with his uncle, a builder and stone-cutter, whom he is close to. He completes his studies at the Ecole Nationale Supérieure des Beaux-Arts, Paris. He writes, builds sets and interprets, notably with David Rachline, for the show Le Classique et l’Indien at the Théâtre Le Palace, Paris. First solo exhibition at the Durand-Dessert gallery (Paris). international exhibition at the Martin-Gropius Bau, Berlin. Double exhibition at the Leo Castelli and Sperone Westwater galleries, New York. Gérard and Elisabeth Garouste move to Marcilly-sur-Eure, where he goes on to establish his painting studio and, later, sculpture studio. They have two children, Guillaume and Olivier. First presentation of the large “Indiennes” pieces at CAPC Bordeaux, which are shown the following year at the Palais des Beaux-Arts, Charleroi. First retrospective at the Pompidou Centre (Paris), which is then repeated in Amsterdam (Stedelijk Museum) and Düsseldorf (Kunsthalle). Travels and stays in Morocco, Jerusalem and India. The “La Source” association, which helps disadvantaged children, is founded. Garouste is officially commissioned for the new Law Courts in Lyon, the new cathedral at Evry, Notre-Dame de
Talant church (Burgundy) and the French National Library (Mitterrand site), which enables him to work in other disciplines, besides painting.
During the same period, his reading leads him to discover the Talmud. From this time, he starts to study Hebrew in order to fully understand the texts. First presentation of the “funny installation” La Dive Bacbuc in Paris (Coprim Foundation). Garouste completes 150
gouache paintings to illustrate Cervantes’ Don Quixote, published by Editions Diane de Selliers. He paints the ceiling of the foyer of the Théâtre Royal in Namur. Paints the fresco in the wedding room of Mons city hall, taking inspiration from Saint George and the Dragon. He produces gouache paintings to illustrate a new edition of The Haggadah (Éditions Assouline) First solo exhibition at Galerie Daniel Templon (Paris) Saintes Ellipses exhibition as part of the Autumn Festival at Salpêtrière chapel, Paris. Creates bronze hand rails in front of the Town Hall, representing Saint Georges and the dragon. A busy year with the publication of his autobiography L’Intranquille (Éditions L’Iconoclaste), which becomes
a bestseller, a retrospective exhibition Le classique et l’indien at the la Villa Medici (Rome) and publication of a monograph with a foreword by Michel Onfray (Éditions Skira-Flammarion). Creates a monument as part of the renovation of an office building in Paris (Carlyle Gorup). Gérard Garouste. Retour aux sources, documentary by Joël Calmettes (Chiloe Productions). From this time, references to psychoanalysis and semiology appear increasingly frequently in his work. Solo exhibition En chemin at the Maeght Foundation (Saint-Paul-de-Vence)