A “Blue Lagoon” in Dour

This splendid lake, limestone in nature, takes you to its depths for a journey full of surprises

A renovation for divers

In the beginning, the quarry held old lime kilns, which stopped activities in 1990. In 2011, the diving club Hainosaurus took over the quarry and carried out some large enhancements in order to develop diving activities. The site now has a pontoon, heated locker rooms, toilets, a gravel car park and an inflation station. As an added benefit, a cafeteria has now opened. The club Hainosaurus, keen to show an ecological approach to the management of the site, chose to offer essentially all the beers from the local brasseries (Blaugies, Boussu, Montignies, Gussignies). Last but not least, a beautiful prairie invites you to come and savour a barbecue. The arbour, tables and benches are at your disposal.

Special features of the site

The water has an area of 2 hectares and a maximum depth of 18 to 22 metres, depending on the season. The water temperature varies between 13°C and 17°C in the deep and between 18°C and 20°C on the surface (down to around 10-12m). Under water, visibility is more or less 5m. 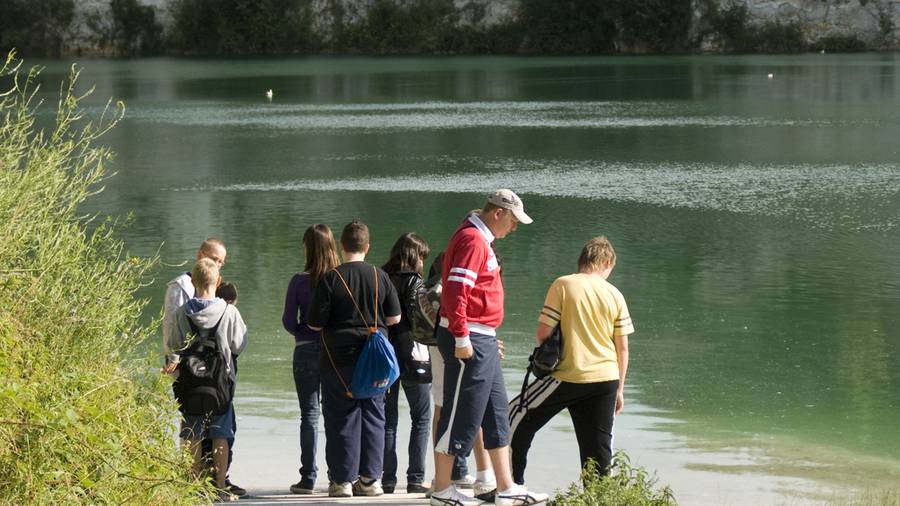 The advantage of the site is that it appeals to both beginners and confirmed divers (the only condition is to be at least 10 years old). Several levels and gentle slopes allow for both a first dive as well as exploratory dives. The pontoon allows people to jump into the water if they wish to, while different certificates can be passed on site for the divers in training.

The fauna is quite diversified, especially since 2016 when the water was replenished in carps and sturgeons. Furthermore, it’s possible to spot pike, bass, eels and most of all crayfish of all sizes.

As for objects, we’ll find some submerged pontoons, a small concrete shelter, a chest, barrels, trees and stumps, but also two bicycles, a motorbike, two sailboats, two small speedboats and four cars. What a find!