The Saint-Denis windmill and its waterfall, vestiges of another era

Just outside of town you will find a bucolic setting

The Grand Mons domain conceals some mysterious and unusual places. Here is one, hidden between the woods and fields, nestled in the valley. In a green setting, surrounded by ponds and protected by the high wall of the old Saint-Denis abbey, appears the old windmill with its outbuildings and its triple waterfall. If we believe the maps, these vestiges were already present in the Middle Ages. In the 18th century, the buildings of the windmill and the old barn were renovated following the same structure and classed as a Heritage Site of Belgium, Walloon Region. Note that, during the war, half the village had electricity thanks to the windmill. A brewery was also established there.

Pierre Deroux, fan of theatre and old stones had a dream of transforming the old barn on the site, located next to his house, into a theatre. In 1979, his dream became a reality when Pierre Deroux acquired the old buildings. But the hardest part was yet to come. In 1997, steps are taken and the work begins: permits from the Walloon Region, the search for stands, transformation of the windmill, restoration of the barn, etc. In October 2006, the culmination and the triumph: the old barn that had almost collapsed became a splendid theatre with 89 comfortable seats. The curtains first went up on the 27th and 28th October of the same year! A hall, a stage, semi-removable stands, a balcony, a system, equipped dressing rooms, a ticket office and also a cafeteria near to the river and a kitchen near to the waterfall (possibility to dine there upon reservation). Nice work!

Shows that are worth a detour

Every month there’s a new show. For a week-end, the artists welcome you to this old barn of the rehabilitated windmill. Are you looking for something original to do for Saturday or Sunday evening? Come to this unusual place and enjoy a convivial and friendly evening. At the same time you can discover the valley of Saint-Denis and its architectural heritage and enjoy a good meal with a view of the waterfall. 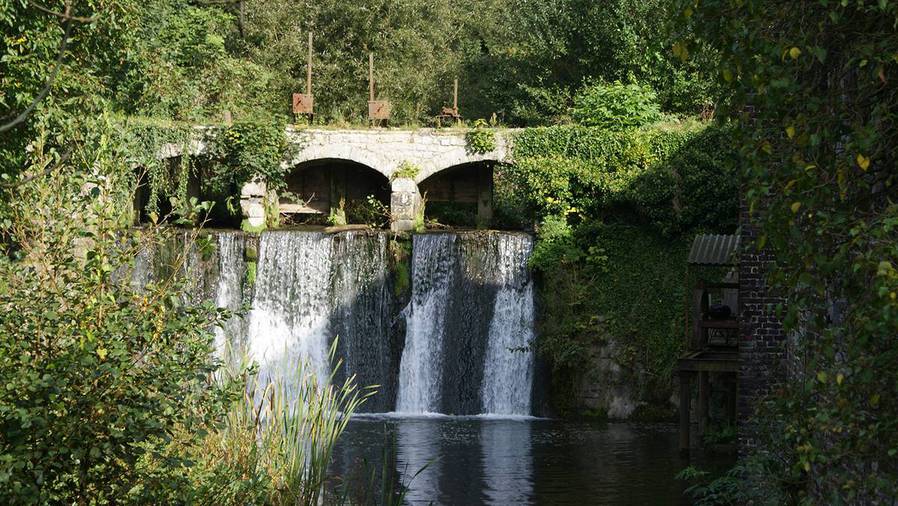 Here is a taste of the next show which will take place next February 15 and 16 at 20:00:
“Bruno Coppens is loverbooked! In this new one-man show, Bruno Coppens decides to donate his body… to theatre to re-enchant the world. Overwhelmed by this planet in its terminal phase, tossed between Forrest Trump and Daech-dump, Bruno comes to comfort the public without moderation to give them the viral push: another world is plausible!”
To find the programme for the rest of the year, just go here: http://www.moulindesaintdenis.be/programme.php?sid=26
#WallonieTerredEau