A waterfall in the heart of the town of Hyon

Moulin-au-Bois, dam-bridge, site of the waterfall: these are all names to designate this charming place

Do you like walking but you think you’ve already seen everything there is to see? Think again! In Hyon there is a waterfall bridge hidden in a bucolic setting. The river and the woods around it promise some beautiful walks alongside the water, especially since the bridge structure has just been renovated.

The site has been restored but also preserved

For security purposes it was necessary to strengthen the bridge, but it was also necessary to preserve the charm of yesteryear. This has been achieved! After almost a year and a half of work, the authorities inaugurated the waterfall bridge in September 2018. The original materials and forms were kept, there are only a few fixtures left here and there, notably the installation of two shelters at the bridge. New plantings (oaks, alders and willows) will also bring a fresh touch to the site and some signs have been put up for walkers, to make the walks more educational for those who wish to learn more about the history of the site and the renovation works.

This waterfall bridge was created at the junction of the Trouille and the river of Nouvelles. Originally, at the end of the 12th century, an ancient state-owned mill stood there, the “Moulin-au-Bois” (Wood Mill). Imagine a seawall where the road is today, a large pond instead of the meadows and three wheels on the windmill instead of one, that’s what the site looked like previously. In 1823, the Windmill was sold by the town of Mons and after the First World War, it was transformed into a tannery. Today, the only thing left of the windmill is a part of the wall, along the road, just above the bridge. But the waterfall remains one of the emblems of the town of Hyon. 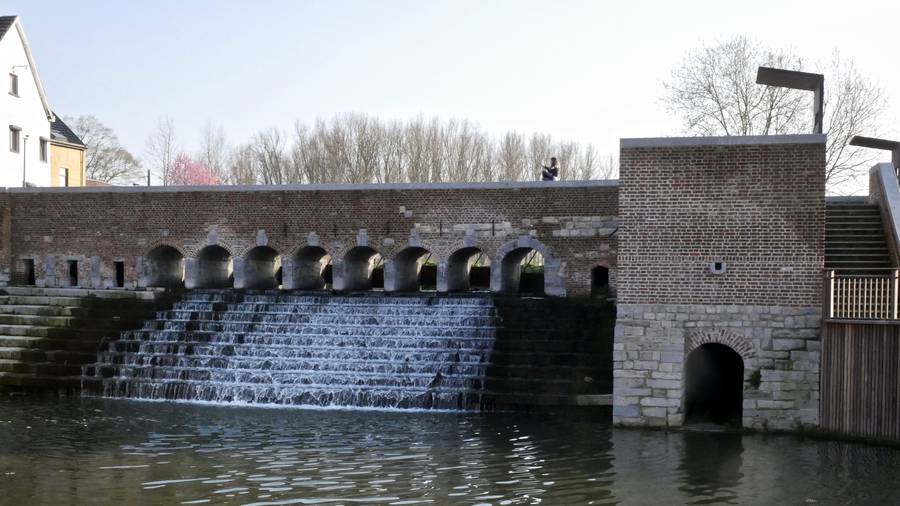