-A +A
Home / See & do / Top Sights / Mons, the First & the Last / Mons Memorial Museum / The MMM, an architectural philosophy

The MMM, an architectural philosophy 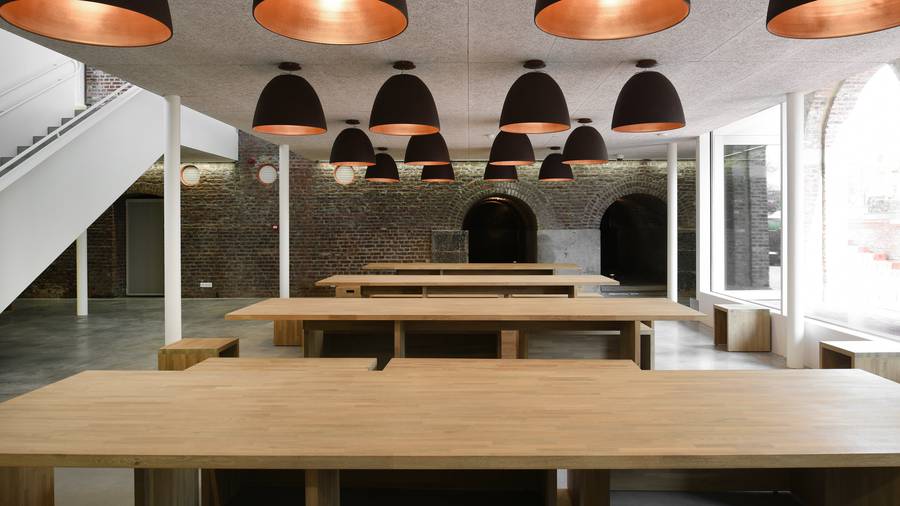 The museum space is located in the site of the old “Machine à eau”. This remarkable building is of great historical importance to the City of Mons for its impact on civil life, architecture and urban development. Restored in the early 1990s, the listed building has been preserved and made even more magnificent as part of an ambitious architectural complex. Two contemporary extensions, one on each side of the historical building, subsume it to create a structure capable of living up to its new purpose.

The architects Pierre Hebbelinck and Pierre de Wit and their team sought to respond to two important urban elements. The first is based on observations of the evolution of the City of Mons, which is at a major turning point in its development. In the 19th century, the city walls were demolished to make way for civic buildings (railway station, hospital, prison, schools, the Water Machine, etc.). This historical building witnessed a revolution in the behaviour of a society in flux. This period turned out to be a transitional one between the two major themes of Mons Memorial Museum. A period of defence and internalisation leading to a period of openness and progress, which would be more conducive to aggression than ever. This notion of transition convinced the architects of the importance of using the historical building as a means of expressing the project. The Water Machine will therefore become the meeting point, the reception area and the starting point for visits. It will be the central meeting place in a complex extending over more than 3000 m².

The second urban element considered is the disintegration of the building's immediate environment, which is made up of a set of undefined spaces that undermine the Water Machine's position as part of the urban fabric. The position adopted by the architects aims to resolve this decomposition by re-establishing a frontage adjacent to the corner of Boulevard Dolez. The dimensions of the new sections will be aligned with the style of the older buildings, enabling them to maintain their own identity. The expression of the extensions develops two essential criteria. The first is to make the most of the light, open aspect of the body of the existing building. A large part of the building is cantilevered, symbolising the effort and difficulty of maintaining the balance of peace. The opacity or at least the openings chosen for the annexes are decisive in creating contrast with the characteristics of the Water Machine and in reflecting the introspective nature of the exhibits displayed throughout the museum.

The architecture fulfils the scenario sought by the scientific and museum teams. The museum's content follows the chronology of the unique history of Mons in respect of the coexistence of civil and military life. The natural light of the Water Machine reflects the periods of freedom. The route through the museum, where this light is measured out, and at times coloured, involves gentle sloping so that visitors stride physically through the periods of conflict.

The subject matters that concern Mons Memorial Museum find their full meaning in this location. These subjects are light (which is very much emphasised in the Water Machine and also directed towards the exhibits along the route through the museum), memory (i.e. making the most of the listed building) and history.

The three main materials of the historical building will also be visible in the wings and the interior of the building:

- Steel: metals are important materials during war time, but also constitute a symbol of prosperity in periods of change. Their use in the museum will also be reminiscent of the mullions and transoms of the main building's glazing;
- Brick: the monolithic extensions will be built from bricks; we are on the site of the former city walls here, so this is a link back to them;
- Glass: present in the wide façades of iron-mullioned glazing, glass will be used to create the openings and spaces for looking through in the two side wings. These openings will not only bring in light but, being positioned at strategic points along the museum route, will direct visitors to look at particular points outside.


Another important aspect of the project was the execution of adjustments to the immediate surroundings, designed to assist in the journey through the museum. The architects wanted to give people the option to take a stroll outside, to complement their visit through the interior. Visitors will be able to get to the edge of the pond from the building. A memorial space is positioned under the building's cantilever, for those who wish to spend some time in contemplation or reflection after their visit. There is also a garden, where purple beech trees will be planted along with a Canadian maple, and poppies will be sown, according to the custom in the United Kingdom.

Discover life at the building site through photos taken by the architecture practice of Pierre Hebbelinck and Pierre de Wit.