1200 m² of space devoted to the permanent exhibition 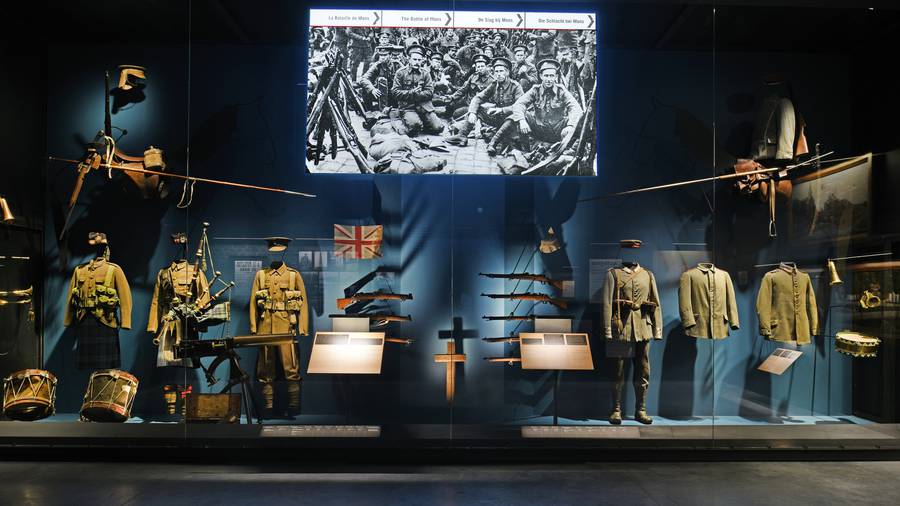 At Mons Memorial Museum, there is 1200 m² of space devoted to the permanent exhibition. By examining the objects on display and being exposed to the witness accounts, which constitute the real underlying theme of the visit, visitors can discover the military history of the City of Mons from the Ancien Régime to the Second World War. This history is presented and explained in the light of international events that explain the context. At the centre of an area heavy with memory, Mons Memorial Museum invites the public, at the end of their visit, to go on a journey through this area which has so many historical traces and memories.

The period from the Middle Ages to the First World War makes up about a fifth of the space of the permanent exhibition.

Owing to its strategic position, Mons has witnessed a great many conflicts throughout its history. Fortified since the 12th century, its history is interspersed with battles, sieges, great fires and periods of rebuilding. Occupied by external forces on numerous occasions, the town has also been home, in peace time, to a number of garrisons, positioned alongside residential areas. This necessary closeness between soldiers and citizens structured society in Mons in the shadow of the city walls. The independence achieved by the Kingdom of Belgium in 1830 marked the start of a long period of peace characterised by industrial progress, from which Mons and its surrounding region benefited considerably.

The evolution of the city walls up until their final destruction in 1871, the battles, sieges, successive occupations, revolutions and the establishment of the Garde Civique (Civic Guard) are all subjects dealt with in this space.

A large part of the permanent exhibition is dedicated to the First World War: almost half of the museum is devoted to it.

During the years of the conflict, Mons found itself in an unusual position, swinging from battleground to occupied area. After being the theatre for the first clash between the British and German armies at the battle of 23 August 1914, Mons was later the place where the Allied armies came to a halt on 11 November 1918 in the wake of their victorious offensive. Before regaining their freedom, the people of Mons endured a period of occupation that lasted four years. All kinds of restrictions, endless checks and regular humiliation were part of daily life for all civilians, who, for the most part, endeavoured to keep living as normally as possible.

The experience of the soldiers stationed in damp and muddy trenches on the Western Front is brought to life in detail. Their relationships with family members left behind, their reactions to new types of weapons, and their difficulties in looking death in the face are some of the subjects spoken about in soldiers' war diaries and in the letters they sent home to loved ones. These previously unseen witness accounts constitute the underlying theme of the visit, giving the historical events a sensitive, emotional aspect.

The First World War engendered a cycle of violence that culminated in the Second World War. Like the 1914-18 war, this conflict makes up a large part of the permanent exhibition of Mons Memorial Museum.

Mons was again invaded by an armed force and again experienced the torment of occupation. As before, civilians found themselves at the heart of the conflict, sometimes as part of the resistance movement, and often as victims of humiliation, deportation or even mass extermination.

The liberation of Mons in September 1944 by American troops marked the start of a period of regained freedom and rebuilding, but also of socio-economic difficulties. Here, too, witness accounts by survivors of the era will give visitors a more personal view on the events that took place during these years.