The 40th Brigade of the Royal Field Artillery, being No 6, No 23 and No 29 batteries, took up position on the high ground in a field looking onto the Beaumont highway. The horses were sheltered in a wood.

During the daytime on 23 August, this gunnery brigade had no interference at all from the Germans’ infantry, but was subjected to a bombardment from their guns that caused three fatalities. The British artillery was in a commanding position that covered the entire battlefield and its guns scythed through the ranks of the German attackers. At 5:15 pm, the gunners received the order to withdraw, doing so at 5:30 pm, escorted by the 12th Platoon of the Gordon Highlanders and under the fire of German guns that fired from Hyon.

The convoy turned into the sunken road that was very narrow, extremely steep and bounded by high banks. Under the German fire, several horses were killed or injured. The men of the 1st Gordon Highlanders were even forced to charge with bayonets a German road-block put across the road leading to Hyon.

On the way down, an ammunition wagon overturned, two drivers as well as the horses being killed. The way was blocked. Besides the line of retreat seemed to be cut, because the Germans had dug in at Hyon. 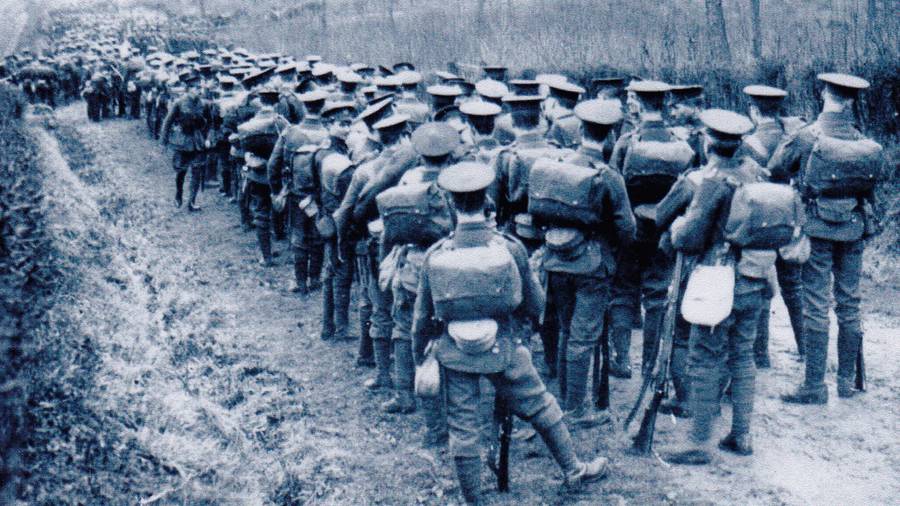 Major INGHAM, commanding No 23 Battery, made a reconnaissance while the work of clearing the obstacle began. The position was put into one of defence. At last, the body of the wagon was lifted to the bank of the road, the gun brought down by hand and dragged towards the highway.

Thanks to strenuous work by the gunners, the transport was unblocked, uncoupled by hand and re-formed at the foot of the hill. The surviving horses were redistributed among the teams on the chemin de Bethleem.

The convoy caught up with the rest of the retreating troops at 23:30 hours and fell back towards Nouvelles.

Go back along Bethlehem Street, and find the Beaumont highway, returning to the Bascule. We now take the Binche road and pass the positions held by the 1st Gordon Highlanders and extended by the 2nd Royal Scots.