The Chateau de Gendebien was still alight, having been hit in the afternoon by incendiary shells. Extending along the main road, to the north-east of the park, it served as a relief hospital and had been placed under the command of Major LONG, medical officer of the 2nd Royal Irish Fusiliers. The windows were hung with the Red Cross flag, while a similar flag had been hoisted above the roof.

During the fire, all the wounded were evacuated. Unfortunately, two men perished in the ruins: Major J.S. MAIDLOW (49th Battery, Royal Field Artillery) and a non-identified private. 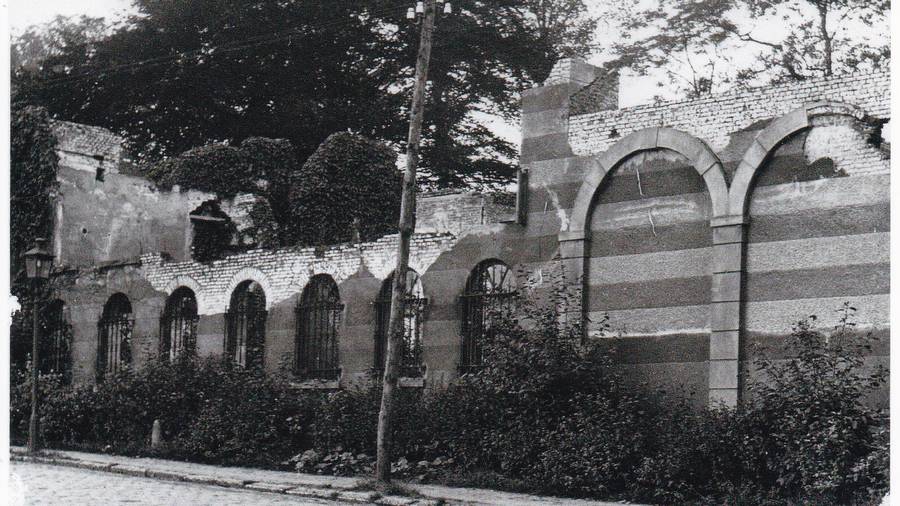 Note that the present Gendebien is where now resides the general who is commander-in-chief of troops in NATO (SHAPE).

The sector had become quite again. Fires began to be lit in the German camp.

Among the hospital’s wounded were Lieutenant PHILIPPS who was unconscious, so that he could no longer give orders to FITZPATRICK. So the latter decided to withdraw and rejoin the batallion. Having buried their dead, his group destroyed the machine-gun as well as weapons that could not be carried.

At midnight, they stole away. In silence and darkness, the 18 survivors, each carrying two rifles, crossed gardens, yards and fields and reached the slopes of Bois-la-Haut. They crossed the Trouille and took two hours of sleep. They rejoined the rest of the batallion during the afternoon of the 24th. FITZPATRICK was awarded the DCM for his action and died on 25 March 1965.

Regain your car, follow the Beaumont highway, turn right at the chemin d’Adresse, park your car for the road is difficult and go on foot to Bois-la-Haut.