Head back to Nimy’s main square, get into your car and take the Chaussée de Bruxelles (N6) north. You will pass SHAPE headquarters on your left and a short time later arrive in Casteau. On the verge, on the left-hand side as you travel north, you will find a monument inscribed as follows:

«It was here, on 22 August 1914, at seven o’clock in the morning that the British Expeditionary Force (BEF) and Germany’s First Army made their first contact. Corporal E. Thomas of C Squadron of the 4th Royal Irish Dragoon Guards fired the first shot, and Captain C.D. Hornby led the first charge that drove the enemy scouts back to the northern edge of Casteau.»


The monument is not actually on the spot where that first, famous shot was fired but at the starting-point for the charge. Opposite this monument, on the house on the other side of the road, you can see the commemorative plaque where the Canadian troops were at the time of the armistice on 11 November, 1918. This is also the place where the First World War both began and ended for Commonwealth troops. 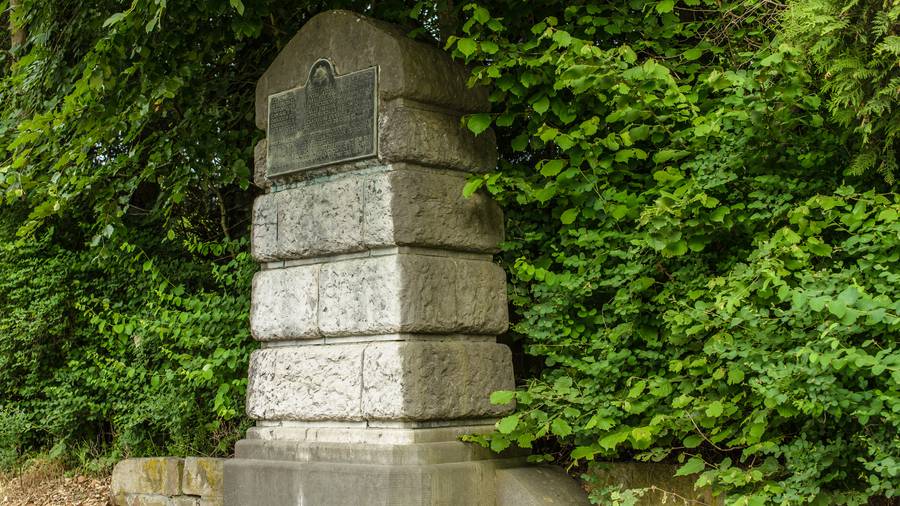 Major-General Allenby’s cavalry division, with strength of five brigades (or 15 regiments) had gone into Belgium on 21 August 1914. Its mission was to make contact with the French army for one thing, and for another, to assess the strength of the enemy by identifying the units committed.

It was not possible, during the day on the 21st, to make contact with the enemy, close as they were. Major Tom BRIDGES who commanded C Squadron of the 4th Royal Irish Dragoon Guards (2 Brigade under Brigadier DE LISLE) decided to make a reconnaissance along the Mons- Brussels road and got into position at dawn on the 22nd on the high ground of Brisee de Saint Denis.

Towards 7 o’clock, at the boundary between Maisieres and Casteau, an advanced guard of four enemy cavalrymen (from the 2nd Cuirassiers) emerged from Casteau. They were immediately spotted by the British, hidden in the undergrowth. After stopping, the enemy half-turned and were straightaway pursued by the 1st Platoon comanded by Captain HORNBY, followed by the 4th Platoon whose men included THOMAS.

The men of the 4th Platoon dismounted near the mansion of Ghislain. The Germans opened fire. THOMAS was the first to draw, aim and fire, and a German rider fell. Whether he had wounded him or not, he never found out.

What is certain is that the British had not fired a shot on the Continent since Waterloo, so that it was THOMAS who had the honour of firing the very first British round of the Great War.
HORNBY pursued the enemy as far as Soignies where they were overtaken, causing a skirmish. In the meantime, the Germans had received reinforcements, notably a company of cyclists. At the spot called Reine de Hongrie (Queen of Hungary) where the chase ended, the Germans had a few dead while the British came back proudly bringing five prisoners at no loss to themselves.

The division of cavalry drew back during the night, in the area of Quievrain in order to strengthen the left flank of the army. Corporal E. THOMAS was a regular soldier, having signed on at the age of 14 and served in India. He disembarked at Boulogne on 15 August 1914. He transferred in 1916 to the Machine-Gun Corps and ended the war without being wounded but suffering from the effects of gas. He got the Military Medal for his bravery and was demobilised in 1923, becoming a commissionnaire at a cinema in Brighton, his birthplace, and died on 10 February 1939.

Return to your car and drive back the same way. At the large crossroads, look for the signpost to Obourg, via the Brisee road, turn to the right at the rue du Camp that you are to follow as far as the rue des Ecossais (Scots Road), then turn left into the rue des Anglais (English Road) and you reach Obourg’s main square. There, turn to the right, go past the bridge that spans the canal; at the bottom, turn left and you are at Obourg’s station. 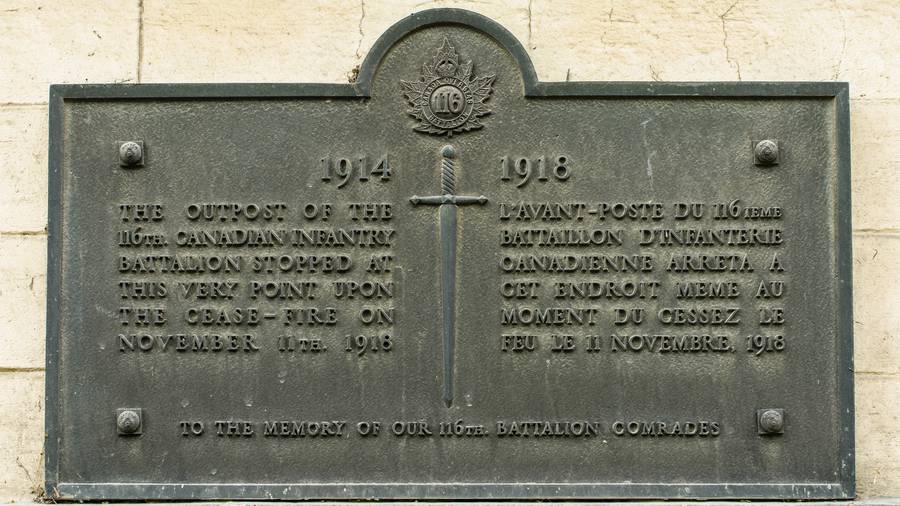