At the rail bridge (follow directions below), Lieutenant Maurice James Dease was the only one left from his machine- gun section, and had to man the weapon himself. He was wounded five times and was finally evacuated to the ambulance, where he died. Private Sydney Frank Godley went forward voluntarily, took the gun and remaining alone, ensured that his comrades could withdraw. Having been wounded, he destroyed the weapon and threw it in the canal. He was then captured. In recognition of their valour, Dease and Godley were awarded the Victoria Cross, the first two of the war. Godley died shortly after the Second World War. Maurice Dease, killed at the age of 24, and Lieutenant Mead lie in the military cemetery at Saint-Symphorien. At the swivel bridge, the battle was just equally bloody, and it took the heroic action of the German soldier Niemeyer to open the way for his comrades by jumping into the water under British fire and activating the bridge’s mechanism. In doing so, Niemeyer was killed.

At 1:10 pm, the first order to withdraw was given to the entire battalion; the order was only carried out at 1:40 pm, because the Germans had forced their way through the Wartons and were advancing toward the place called « La Bascule ». This meant that the 4th Royal Fusiliers faced being surrounded. The British retreated towards Mons, along the Chaussée de Bruxelles, and up the rue de Nimy to the Mons town square (Grand-Place); (the reverse of the itinerary that brought you here.) As they fell back, they took advantage of telegraph poles and recessed doorways to fire back. A small group of some 20 men dug in at the end of the rue de Nimy and awaited the Germans. But faced with the spectacle of the Germans advancing behind a group of hostages, they withdrew without daring to fire. According to the official report, the 4th Royal Fusiliers lost seven officers and 105 other men (killed, wounded and missing). The majority of the wounded had to be left in enemy hands so as not to delay the retreat. 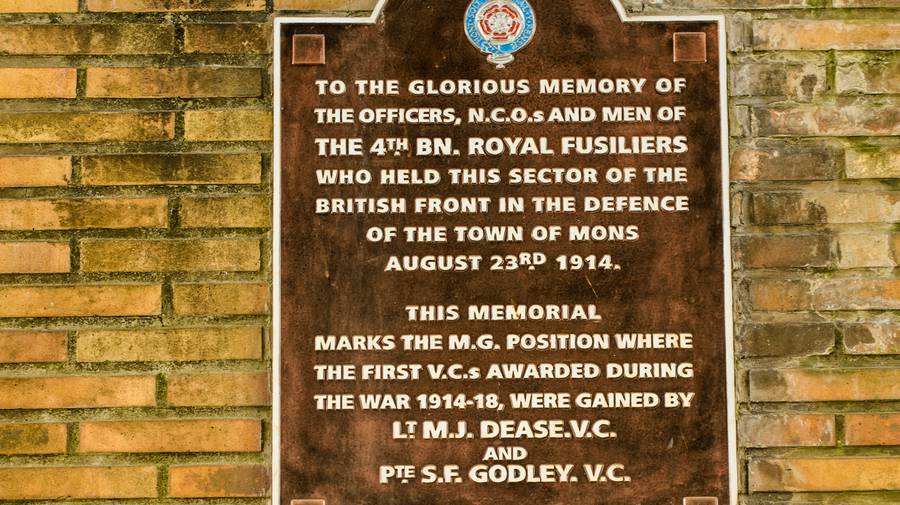 Following the British retreat, the Germans crossed the canal, set fire to 108 houses along the Chaussée de Bruxelles, and massacred 22 civilians. They took hostages from the village and pushed them out in front of them, using them as a human shield as they marched up the Chaussée de Bruxelles and the rue de Nimy. When they got to the Mons Grand-Place, they added the mayor, Jean Lescarts, to the group of hostages and the advance continued along the high street. Arriving at Trou Oudart, they came under fire from elements of the 1st Lincolnshire. In the panic and the gunfire that ensued, four hostages were killed on the spot and two others were wounded and died later.


From the former town hall, follow the road that leads to the canal, go along the towpath to the railway bridge (Point 2). Beneath its arch is a plaque with the following inscription:

«To the glorious memory of the Officers, NCO and men of the 4th BN Royal Fusiliers who held this sector of the British Front in the defense of the town of Mons. August 23/8/14. This memorial marks the M.G. position where the first V.C.’s awarded during the war 14-18 were gained by Lt M.J. DEASE and Pte S.F. GODLEY».