-A +A
Home / See & do / Top Sights / Mons, the First & the Last / Battlefields Guide / 10. The "Bascule" Monument / Arthur Frederick Carter or the importance of giving a life to a face

August 1914. In the hours that followed the shock of the invasion of the country, thousands of young men from England landed on the continent to defend Belgium and its people. Some are professional soldiers, other fresh recruits indignant at the invasion of the territory by the German troops and with the idea that their own country is threatened. Among them, a young twenty-year old man,.. .his name is Arthur Frederick Carter.

22 August 1914, in the afternoon, on the eve of the terrible battle of Mons, this young soldier is innocent and broadly smiling for a Mons photographer at a place called « La Bascule », without knowing that a few hours later, the blood and tears will fall on his own in the first big confrontation between British and German troops. He is far from imagining that the war will last four years and that it will make millions of victims, both civilian and military.

From him, we only know his rank and surname: « Private Carter » 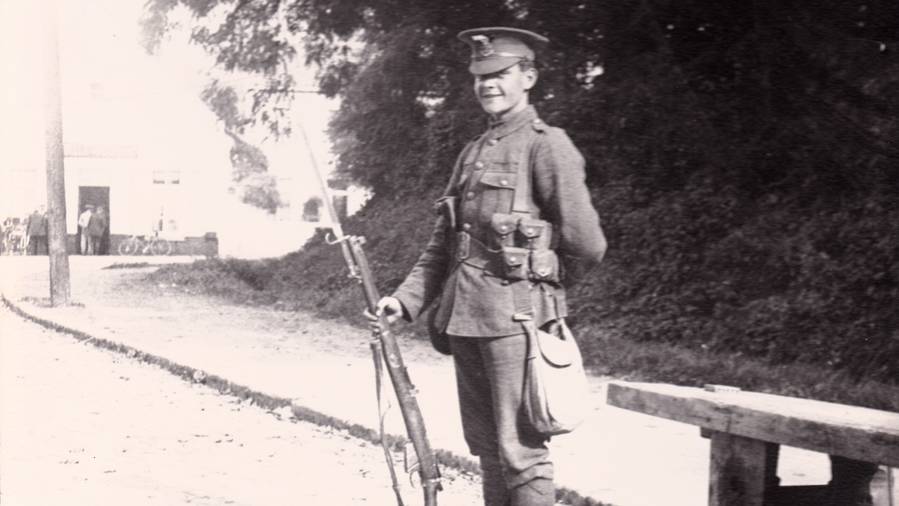 One hundred years later, this wonderful photo of the young man remains but his story, which is part of history, remained unknown. Through collaboration in the context of the show Who do you think you are? Live from Birmingham, three Belgians wonder. They are the Belgian-English genealogist Marie CAPPART, Philippe MAREE of the Belgian Tourist Office in London and Michel VASKO, Deputy Director of the Tourist Office of Mons: «What happened to him?» Did he survive the battle of Mons? The war? Supported by dozens of others, the three «friends of Carter» begin a long and exciting investigation looking for information about his life, his service during the war. The soldier Carter had to be found!

Marie CAPPART says: «Thousands of young men enrolled for freedom in the war years and among them, a countless number of men with the surname “Carter», there were a lot of them on the front, even in the early days of the conflict. It took many months to go through the list of potential candidates and to extract the most likely: Arthur Frederick Carter file number L13834. Enrolled in the 3rd Regiment of Middlesex, he served for the entirety of the conflict. This bravery earned him honours including the famous Mons Star, a decoration, honouring the soldiers who had been under fire between 5th August and 30th November 1914. Information snippets overlap, one by one. Patiently the puzzle of history comes to life before our eyes. The archives of the Commonwealth War Graves Commission learn us that he presumably was not KIA, «Killed in action» and that in itself is a big relief. But how can we find out more because his service record has disappeared in the archives fire during the second World War?

In August 2015, I discovered a document of discharge on a genealogical website of the Army dated spring 1919 with the number of the corresponding regiment. This is it! He’s our man, and he survived! Despite the late hour, I cannot help but contact my fellow researchers. We are very happy, knowing that our friend Carter escaped the horrors of the conflict! Given his young age and his tenacity, we can’t help but think that he could have been involved in the second war, that maybe he got married, had children, is still living today? Excited by the idea, we get to work again, determined to pay tribute to him.

Some time later, we receive confirmation that Arthur Frederick did fight in the 39-45 war, that he married and had children. We examine the possible certificates, places and dates, by combining these data with directories, social networks. Finally, we localise the great-grandchildren of Arthur Frederick Carter! The victory of life against death, democracy against barbarism and self sacrifice as a fabulous legacy. »

In locating descendants of Arthur Frederick, we forward all the connections which link the city of Mons and its region to the thousands of families who have also sent a son, a father, a brother to the front. And we pay tribute to them, as we will do also in 2018 for the commemoration of the Armistice and everything by specifying that our duty of remembrance will not stop when the bands stop playing. Against barbarism, the memory of these soldiers needs to be saluted forever more, their story told to the young generations so that in 2118, young people will still lay down «poppies» in memory of the friends of Arthur Frederick Carter who did not, unlike him, have a chance to survive and of transmitting life.