While the chapter of St Germain, who was male, shared their premises with them, the destiny of Mons really rested in the hands of women. And dedicating one’s life to God didn’t mean giving up the rest of it; far from it. The canonesses were from the largest families in Europe and were erudite. They led a life where culture, music and literature were welcomed. These women knew how to dress up in finery, how to be feminine and elegant. Over the centuries, they grew in power and fortune. It was they who built the sumptuous Collegiate Church of St Waltrude...

We know very little about the life that these godly women led to begin with. It is only in the ninth century that we find the monasterium of Castri in a script of the testament of Ansegisus, then abbot of Saint-Wandrille (near Rouen). A priori, monastery implies nuns, and nun implies rules to observe. And it is from subjugation to these rules (canons) that the term canonesses (canonicæ) derives. The scripts mention the canonesses strictly speaking from 1123 and mention the chapter towards 1149–1150. From then on, the canonesses were no longer bound by vows of poverty, chastity or obedience. They could join the institution at any age and some were appointed before they’d even reached six years old. They were then raised and educated by the community and from the age of twenty-five, they could leave the institution to build a family while retaining their title of canoness but surrendering their prebend (income attached to their office). When they died, they maintained their rights to be buried in the Collegiate.

Over time, the institution evolved, ultimately becoming secular around the 11th and 12th centuries. This is due to the fact that in the 10th century, the civil and sovereign authorities laid claim to the material riches gifted to the monasteries by the aristocracy at the time of their creation in the 7th century. In addition, the civil authorities wanted to intervene in the regulation specific to the chapter. Nevertheless, the community was still required to obey the abbess or the dean.

The number of canonesses at the Mons institution was limited to thirty (the sum of the revenue to be distributed determined the number of recipients). The requirements for admission into the chapter were redefined on several occasions and from the 13th century onwards, only the legitimate daughters of knights could claim this entitlement. However, as some of the rules seemed too strict, several members of noble chapters refused to adhere to them. For example, no one could reach canoness status before the age of eighteen, whereas previously, there had been no age requirement. Towards the end of the 18th century, the canonesses were allowed to leave the monastery for up to four months per year. As a result, they were no longer “under house arrest”. During the final years of the Ancien Régime, the canonesses adopted a rather worldly existence, attending the balls of the nobility in splendid outfits. The institution therefore became more of a place of lodging and education for young noble girls awaiting marriage. 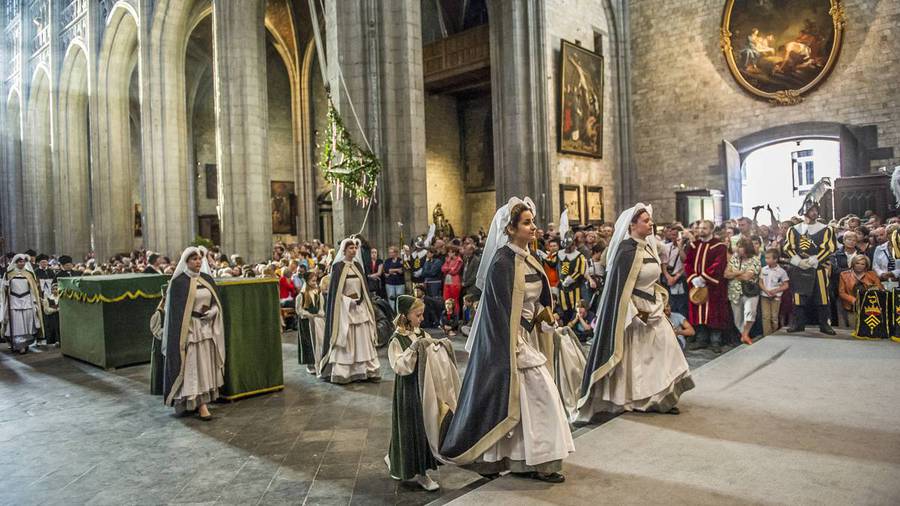 However, in 1794, when Belgium was annexed by France, the chapter was abolished and the assets were sold at auction.

The role of the canonesses

They were primarily responsible for ensuring the relics of St Waltrude were preserved. Aside from this, in addition to attending religious services, their lives were dedicated to helping the poor. Notably, in 1450, the canonesses requested the construction of a Brabantine Gothic collegiate church. Through this request, they developed the economy of Mons, by providing work for hundreds of people (in the quarries and brickworks, with the glassmakers, carpenters, metalworkers, roofers, etc.). The canonesses also helped change the perception of art. By commandeering the artist, Jacques Du Broeucq, to decorate their collegiate church, they opened the door to new trends (renaissance style, innovative materials, emphasis on movement and life, etc.). Authorised to travel, the canonesses encountered other cultures and demonstrated great open-mindedness.