Waltrude, her life and her works

Waltrude was born at the beginning of the seventh century, in the municipality of Cousolre in the north of France. Going by her real name, Waldetrude grew up in a wealthy and influential noble family. Embracing her destiny, she married the noble Vincent Madelgaire and gave birth to four children (Aldetrude, Madelberte, Landry and Dentelin).

Only then did she decide to devote her life to God, being faithful to the currents of her time, which was tending towards a spiritual renewal. It is not by chance that so many saints appeared in the seventh century. Waltrude went on to leave her husband and sons and retire in an oratory on Mons’ emerging hill. As for her daughters, they would follow their aunt Aldegonde to Maubeuge and succeed her at the head of the monastery founded by the latter. The transition from family life to monastic life would not be easy, but Waltrude eventually met her goals. The oratory took the form of a monastery before transforming into a noble chapter and becoming a powerful institution that would shape the future city of Mons.

Upon her death, established by tradition as falling on 9 April 688, Waltrude was proclaimed holy by the vox populi and her body raised above the altar. The Church immediately saw Waltrude’s greatness as an example for all and would help broadcast her reputation for holiness. Acquiring the status of patron of the city of Mons, Waltrude became a true object of worship and devotion. The remains of the saint, gradually placed in different reliquaries, were kept in the Collegiate Church and attracted many pilgrims from all walks of life. 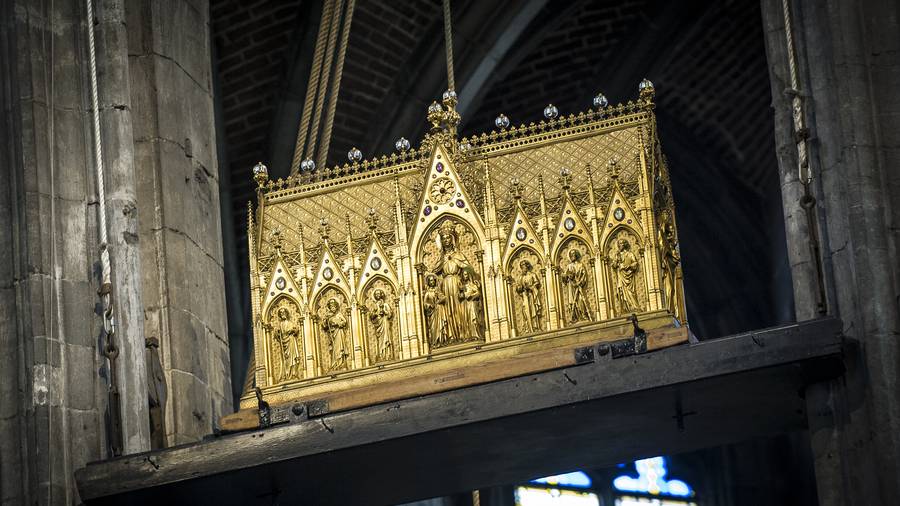 Moreover, St Waltrude was summoned for medical purposes. She seemed to particularly heal so-called “fire of the spark”, namely malignant ergotism, an infection that occurred around the fifteenth century due to famines and which caused an internal burning sensation. People who suffered were treated at the expense of the chapter and stayed in the Collegiate.

Many succeeded Waltrude in her undertaking, including the canonesses five centuries later.

Waltrude, her life and her works