Revisiting the history of the organ

Initially, in around 1780 all organs influenced by the Louis XVI style were designed for the Abbey of Cambron-Casteau. Ermel, an organ builder from Mons, had incorporated a classically inspired instrument of 49 stops spread over four manuals and a pedal board. After the Fury revolt, the Collegiate Church of St Waltrude was given back to the church but without its ornaments and organs of which it had been stripped. In 1804, the time had come to buy back the prestigious organ of Cambron and three years later, the request was granted. in 1811, the organ found a new home at the Collegiate. Ermel had added a bombarde to the pedalboard, increased the space between the two casings and improved the instrument’s wind supply. Other repairs followed. The organ would have more notes as well as more serious stops and a swell box, the wind tunnel and piping would be restored while the harmonisation of montre stops (diapasons) would also be improved. The first comprehensive reconstruction would occur soon after, since the instrument did not function to its full capacity. It was updated in line with the organ building of the day by Maurice Delmotte in 1952. On 21 December of the same year, the organ received the blessing of Monseigneur Himmer under Queen Elizabeth’s gaze. Emile De Backer (principle organist) and Maurice Guillaume (virtuoso prizewinner at the Conservatoire de Bruxelles) were the first to press the keyboards, while the little singers of Saint-Laurent de Paris and the “Royale Union” of La Bouverie sang some notes. More recently, from 2014 to 2018, the great organ was again restored, this time making it the most complete organ in Wallonia. The Klais (Bonn, Germany) and Thomas (Ster-Francorchamps, Belgium) houses took charge of it. There are currently 4,400 pipes, 70 registers spread over four manuals and one pedal board. 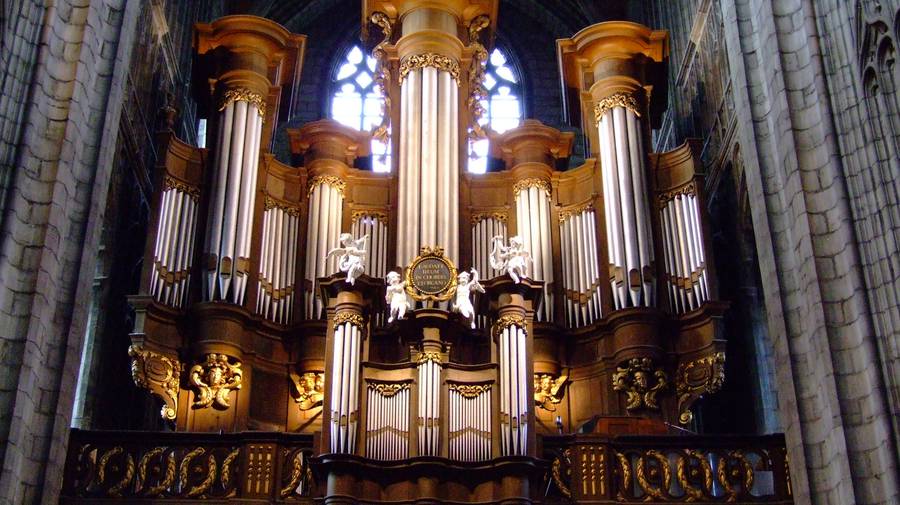 From an early age, Bernard Carlier has been passionate about music. Born in Nivelles in 1958, he was only five when he took his first piano lessons. At 12, he was already a parish organist. At the end of his high school studies, he chose to pursue music and joined the Higher Institute of Church Music and Pedagogy of Namur for three years. He then joined the Royal Conservatory of Music in Brussels and won the first year organ awards within the space of a year, for written and practical harmony. He obtained an advanced organ diploma two years later. First a professor, he then became director of the Academy of Music of Mont-sur-Marchienne. Bernard Carlier frequently performed at Maredsous Abbey and through a competitive application process, he ended up being appointed principle player of the great organ of the Collegiate Church of St Waltrude, aged 34. He has performed as soloist in most large churches in Belgium but also in France and Spain. Moreover, he has held several concerts as a member of the National Orchestra of Belgium. Also a board member of the Walloon Union of Organists, he promotes the (re)discovery of unknown Belgian writers. His repertoire ranges from baroque to modern, but the Belgian and French Romantic-Symphonic schools are particularly close to his heart. Finally, he is considered an expert in 19th and 20th century organ building.

Born in 1994, Benoit Lebeau assists him. His organ apprenticeship began when he was seven, along with piano lessons. At the age of 20, passionate about the organ and the history of this instrument, he founded an association “Orgues en Campagnes ASBL” to preserve the organs of Ham-sur-Heure-Nalinnes, his home town. In 2015, he won the “cultural merit” award, “hope” category, in his municipality. In 2017, he obtained a Master’s teaching degree at the Superior Institute of Music and Pedagogy. Benoit has followed many master classes with big names in the field and regularly holds concerts in Wallonia and Brussels. He performs as a soloist, accompanist or in a duo alongside Jérémi Dupont, trumpet player. Benoit would be appointed principle organist of Forchies-la-Marche, Donstiennes, La Roche-en-Ardenne and Ban d’Ortho before becoming joint principle of the Collegiate Church of St Waltrude of Mons in 2017. In the same year, he also became organ teacher at the Conservatoire Lucien Robert de Tamines. In addition, he is a member of the Diocesan Organs Commission for the Diocese of Tournai and has been appointed organist-scholar at the Church of Our Lady of Finistère in Brussels for the 2017–2018 season.

Following the restoration of the Collegiate Church of St Waltrude’s organ, an inaugural recital will be given by Olivier Latry on Sunday 15 April 2018 at 5.00pm. After more than three years of silence, the principle organist of Notre-Dame de Paris, one of the greatest of our time and incidentally ranked among the world’s top five, will inject new life back into the organs of Mons’ Collegiate Church. Olivier Latry will perform, among others, works by Jacques Boyvin, Johann Sebastian Bach, Claude Debussy and Maurice Duruflé. To purchase tickets, go to visitMons on the Grand-Place (or by phone +32 (0) 65/33 55 80) or on the official website of St Waltrude (https://www.waudru.be/project/concert-inaugural-orgue/).