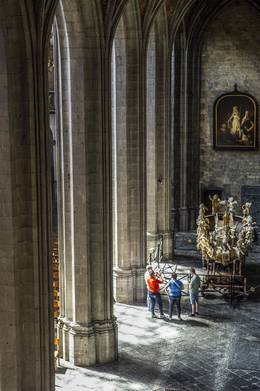 A carved, painted and gilded wooden vehicle, it was designed between 1780 and 1781 by the Mons residents Ghienne and Midavaine in the style of Louis XVI. Nowadays, it is the only chariot still in use. It usually rests in the side aisle of the Collegiate Church of St Waltrude but once a year, the weekend of the Doudou, it heads through the streets of Mons during the Procession of the Trinity.

First of all, it is the Golden Chariot that is responsible for diving the shrine of St Waltrude through the city. A privilege and a unique opportunity for residents to greet their patron saint at close quarters. As such, in 1988, during the 13th centenary of Waltrude’s death, the Golden Chariot had to undergo some renovations. Even if it makes an appearance just one day a year, it really is put through the wringer every time! Its second task consists of going back up the paved ramp that runs along the Collegiate Church in one go, otherwise the city will receive bad luck in the coming year. Drawn by six draft horses and pushed to the rear by a frenzied crowd, this means the chariot has a good chance of achieving its goal, despite its two-ton weight.

Origins of the procession

Very soon after Waltrude’s death, many processions were held in her memory. Her relics were regularly brought out, especially during the feasts of the liturgical calendar. From 1314, a kar (chariot) was used to drive the saint’s body through the city. Among the various religious rituals concerning St Waltrude, that of the procession has stood the test of time. The year 1348 brought with it the terrible plague epidemic which appears to have exterminated a significant part of the Western population, with the inhabitants of Mons not being spared. The canonesses, the Mons clergy and the municipal authorities decided to orchestrate a solemn procession on 7 October 1349, praying to St Waltrude to rid them of the plague. Her body was taken to the Bruyères de Casteau, where the relics of St Vincent, her husband, had also been brought by the chapter of Soignies. An eight-day homage followed before the epidemic abated and finally disappeared. The procession then became a tradition, as a homage paid by the people of Mons to St Waltrude to thank her for her protection. However, the date of the procession was changed from October to Trinity Sunday (the Sunday after Pentecost) to avoid any unreliable autumn weather. It thus supplanted the main procession of the city, which took place on Ascension Day. Currently, the Golden Chariot, which closes the procession, still carries the relics of St Waltrude. It winds through the streets of Mons, accompanied by 1,500 participants. On the chariot, around the shrine, a priest reads a miracle traditionally attributed to the saint in the most symbolic parts of the city. The most faithful members of the public use this interlude to give any children also on the chariot objects to attach to the shrine, hoping this gesture might bring them happiness. 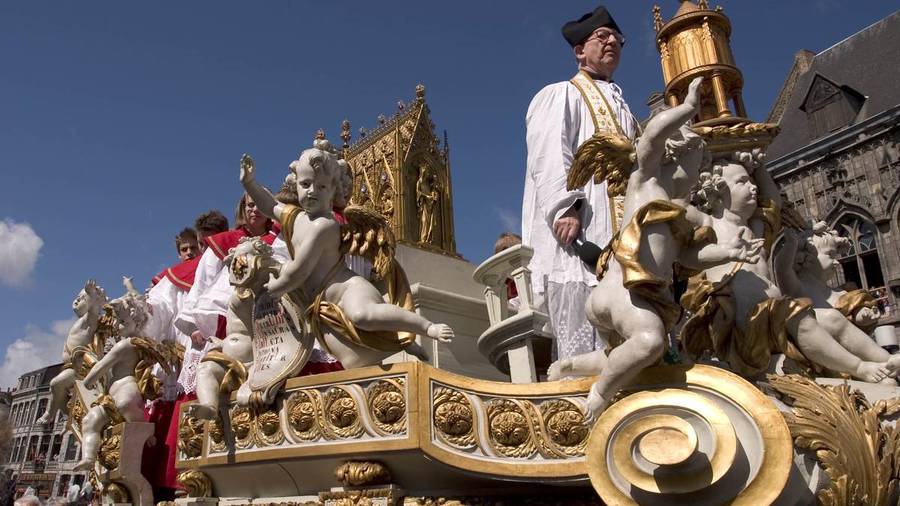