In the beginning, a sanctuary was built on the hill of the future city of Mons; it was later replaced by a Roman church and in the 15th century, the gothic Collegiate Church we admire today. Construction began in 1450, with the choir. This part was finished around 1506, the transept between 1525 and 1527, while the main nave was only completed one hundred years later, in 1621. These sections, built based on a Latin cross plan, are surrounded by 29 chapels. The canonesses of St Waltrude also wanted to add a 190-metre-tall tower to their church, on the eastern side. The first stones were laid around 1549, but construction was never completed. This gave rise to the Mons saying: “It's like the tower of St Waltrude: we'll never see the end of it!”, to stress that something is taking a long time. The work was finally finished around 1686–1687.

An example of Brabantine Gothic architecture

115 metres long, 32 metres wide (at the transept) and 24.5 metres tall (at the upper part of the nave), the St Waltrude Collegiate Church is a perfect example of the Brabantine Gothic style. It respects the traditional 15th century basilica “window” plan, with the following characteristics: the arms of the transept do not extend out, chapels form the edges of the choir, which is smaller than the nave and surrounded by an ambulatory.

The Collegiate Church was built from local materials such as stone, namely bluestone and sandstone which, due to their diversity, make the whole building more colourful. Generally, stone, a fine and durable material, was used in the construction of public buildings, both civil and religious (churches, town halls, markets buildings), and defence structures (walls, doors of urban fortifications). 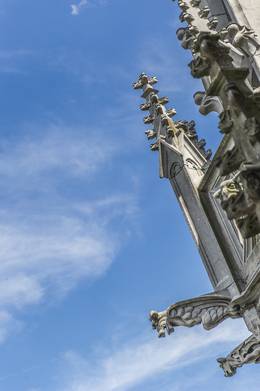 More specifically, bluestone (also known as little granite) was chosen when the material had to be finely cut, chiselled or sculpted. It is therefore found in the upper parts, the frames of the stained glass windows, the ridges, the flying buttresses and the gargoyles. In addition, the hard and resistant Bray sandstone highlights the solid appearance of the walls, giving them a yellow tinge, while black slates cover the structure, adding an extra touch to the building. There is one final material, which is by no means less important, since this was the first time it was used in Mons architecture: iron. At the request of the canonesses, the stone mullions in the large window in the southern arm of the transept were replaced by iron mullions (end of the 18th century). 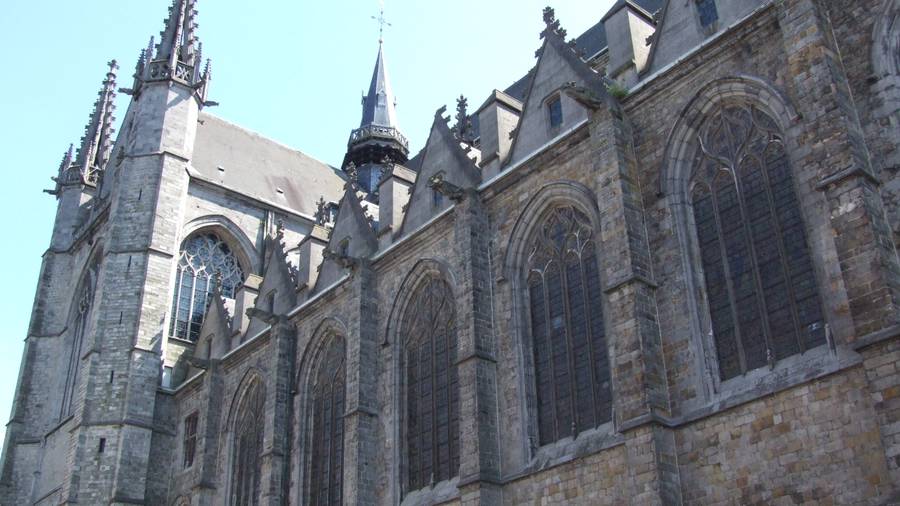 Among the elements that form the Collegiate Church, the chevet has one of the most harmonious compositions. The pyramid-shaped hemicycle rises up from a large, decorated base, towards the upper ceiling of the choir. Apart from the 13 corbels of the chevet and the gargoyles, the building decoration is fairly simple. It is possible that the single tower located on the facade, set back from the nave, would have had more decoration, including some specific to the renaissance style. On the outside, there is also a statue of Waltrude the only exterior statue of the saint (De Beule, 1928).