Sculptures and bas-reliefs by Du Broeucq preside over the Collegiate in various places. Each of his works betray a certain emotion and such an attitude that they almost appear life-like.

These are seven statues that are arranged in the choir of the church. Among them are:
The three theological virtues (1543–1544): Faith, Hope and Charity, which frame the high altar. You can see the first remove the Eucharist from the dog of infidelity while the second seems to want to ascend to heaven. Charity is seen posing with children.
The Four Cardinal Virtues (1544): Justice, Temperance, Prudence and Strength, aligned in pairs along the nineteenth-century wrought-iron gate that encloses the choir. You can recognise the first with the sword she raises with one hand and with the scale she holds in the other. Temperance is in charge of the reins, Prudence sports mirror and snake and Strength appears with an olive branch, breaking a column.
These seven statues are distinguished by their precise detailing and their slim outline. Their refined pose, coupled with the light and fluid drape that partially covers them, suggests sensual anatomy.

Several decorate the Collegiate. Firstly, there are three integrated into the high altar: the Last Supper (1544), Ecce Homo (1546) and the Condemnation of Christ (1546), typical examples of Mannerism (elongated forms, poses with precarious balances, dissonance of perspectives and exaggerated arrangements). Two other large reliefs on the south arm of the transept have the same characteristic features: the Flagellation (1545) and the Carrying of the Cross (1545).

In addition, three tondis (1540–1541), originally appearing under each of the arches of the rood screen, refer to the three characters of the Trinity that are the Father (in the Creation of Eve), the Son (in Judgment Last) and the Spirit (in the Triumph of Religion). Here, Jacques Du Broeucq uses the circular shape of the frame and its concave bottom to integrate dynamic and concentric compositions, exploiting all available perspectives. 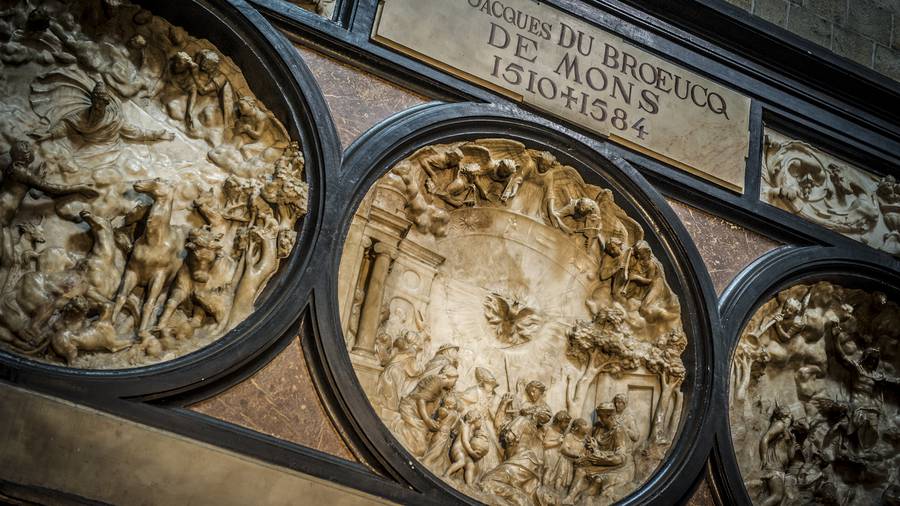 Among the various reliefs of Du Broeucq, this one, dating from 1547, deserves special attention. Firstly, this is because it is the largest relief preserved in the former Low Countries (192 x 250 cm). Secondly, because it is the artist’s only work from Mons to have been signed, although at first it could only be admired by the ladies of the chapter and the privileged few who accessed the church choir. Now, the Resurrection sits in the north arm of the transept, displaying its characters in life-size dimensions. Such a presentation is exceptional, but what is even more exceptional is seeing a character emerging in the round (i.e. fully developed in its three dimensions), namely Christ coming out of the tomb, a sign of victory and liberation specific to the Christian Resurrection. 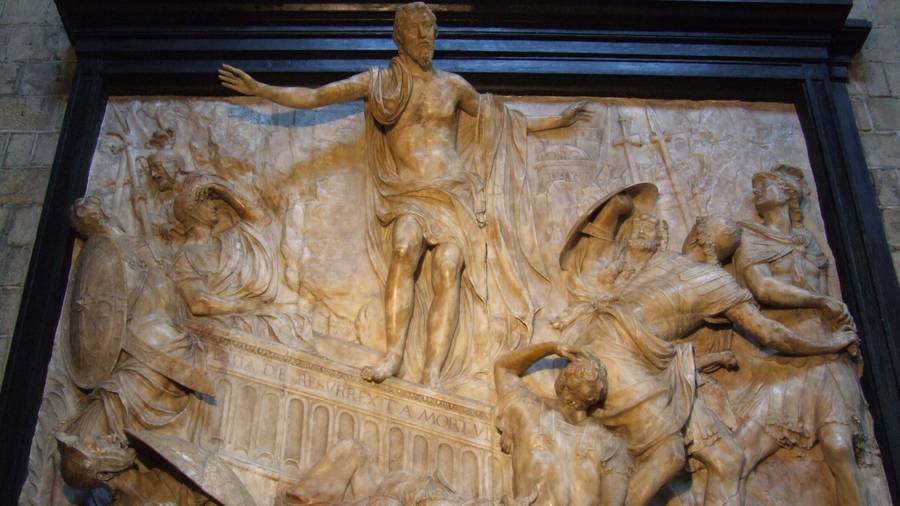