The industrial era left a durable mark on the appearance of former mining towns and cities.

Large mansions bear witness to the financial clout of coal mines in the past.
Amongst these beautiful homes, you will be surprised to see some fine Art Deco buildings. Everything will be explained.

Here is a guide for those of you who would like to be able to distinguish an Art Deco house from one in an another style. The Art Deco artistic movement started at the beginning of the 20th century and was at its zenith in the 20s and 30s. To simplify, there are many straight lines and symmetrical patterns in the Art Deco style. Buildings are in stripped-down and geometrical shapes and do not feature many curves but do feature many corners. One must thus take in the architecture but also the decorations of the buildings. Since -- as its name indicates -- the Art Deco design style attaches major importance to decorative items. Cornices and lintels are often covered with geometrical haut-reliefs. Let us take a closer look at the topic.

In the centre of Frameries

In Frameries, Art Deco architecture can still be admired in some streets in the centre of town. Looking skywards, while taking advantage of the many shops, a short stroll to look at several Art Deco structures is possible. Let us start in Rue des Alliés, the main shopping street in the municipality. If you are going shopping, take some time to contemplate some of the façades of buildings. At no. 41, the renowned Café de l’Harmonie stands out due to the especially interesting letters in its sign. You should be aware that it is one of the oldest cafés in Frameries and that the mindset of village cafés from the old days lives on there. On Rue des Alliés, you will go past the brand new Centre Commercial des Quatre Pavés shopping centre. A stone’s throw from there (at number 132), you will need to look up to the first floor to take in architecture which is typical of Frameries, that is to say a modernist scale (i.e. quite large) with a touch of the Art Deco style in the manner in which the building has been decorated.

If you go down Rue de France, you will come across several different architectural styles, all different. You will see modernist structure, very dense, generally built using bricks, but also some great examples of curvacious Art Nouveau houses. At numbers 4, 6 and 8, the three houses form a very beautiful ensemble due to the decorative and colourful treatment administered to their façades. Just look at those magnificent skylights! A little bit farther on, at no. 18, you can discover a striking structure designed by Pluvinage, an architect from Frameries who was very in vogue at the start of the 20th century. Its flat roof and above all its rendered wall are typical of the Art Deco style. Fronting onto the pavement opposite, at no. 47, is an imposing villa in the cottage style, niched in a splendid landscaped garden.

Villas in the cottage style can be admired here and there in the town and notably on Rue du Bois-Bourdon. Don’t miss the three great buildings at no. 68, at no. 70 and at no. 74. The first two are attached and were built in the first third of the 20th century. If you like the Opal Coast or the coast of Normandy, the holiday spirit engendered by the skylights and the pediments will already be familiar to you. What class! And what can you say about the one next to them, which is slightly farther back from the pavement than them? Angular bays, plane decor, columns, and so on. The façade alone is an Art Deco manual.

Please note that as regards the majority of the buildings referred to, they are private properties. Enjoying looking at them must go hand in hand with respect for people’s privacy. Before you go off to do something else, stop by Grand’Place to take in the magnificent Town Hall. It is not Art Deco -- far from it, in fact -- but its imposing and eclectic architecture topped off with turrets might also impress you! 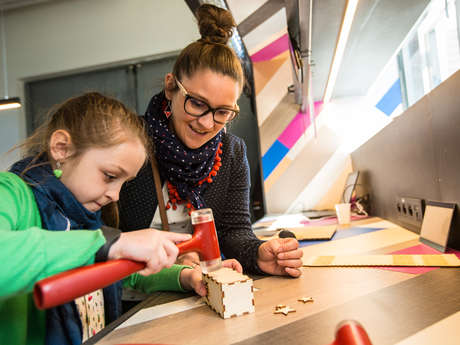