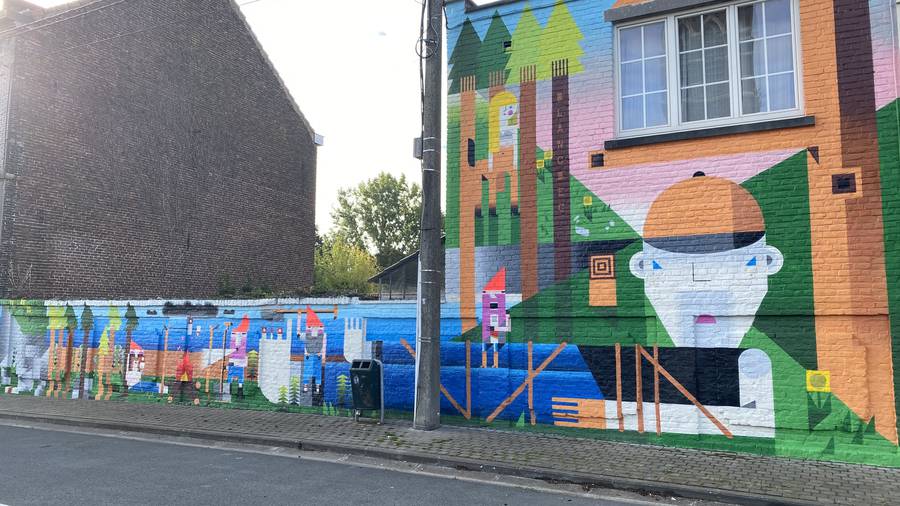 After spending 10 years in the graffiti movement under the pseudonym VEKS, at the start of 2000, Blancbec took a new approach to his work.
He developed his first paintings, furnished with geometric writings inspired by graffiti.
In Barcelona in 2002, he discovered the work of posters painted by hand and glued, a revelation!
This technique attracted him because he could combine workshop activity with an urban activity. He embraced it!
The geometric writings of the beginning gradually became characters. Then the bird appeared.
Canvases were provisionally put aside to make place for paper.
At the beginning of 2003, the first bird posters appeared on the walls of the city; they were the first of their kind in Brussels.
The bird and the artist call themselves “Blancbec” chosen for the lack of experience of the artist and the self-assurance of his bird.
His own geometric construction and his vibrant chromatic range created a style that was instantly recognisable.
Since then, some audacious protagonists have integrated his world that he still represents through new mediums and techniques.
The artist Blancbec exhibits regularly and his works always appear in an urban setting.


His fresco “Les chasseurs d'orteils” is a revisiting of the urban legend “Les Coupeux d’Artoilles”, the nickname given to the people of Ghlin. Intertwining the story with Gulliver’s world, the artist tells the tale of a poacher and the inhabitants of Venus valley as they defend their forest. The misadventure ends with a banquet of toes around a log fire.