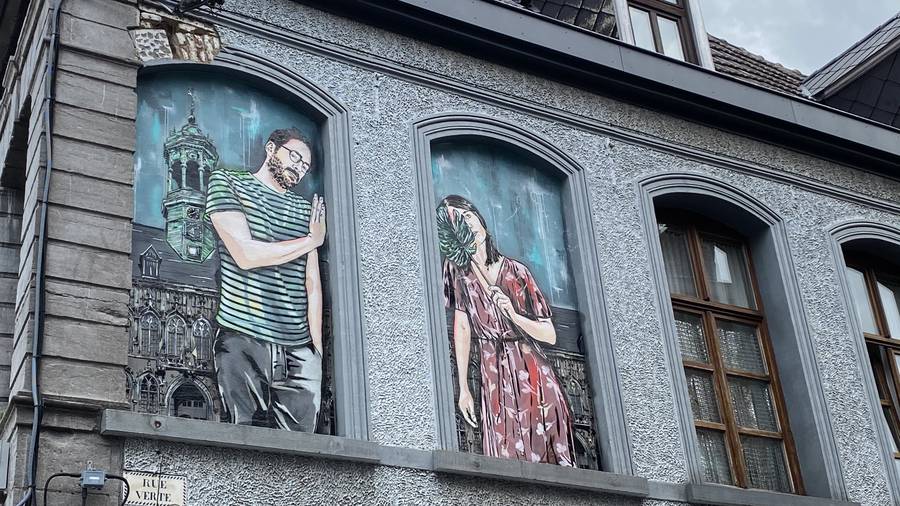 Many urban artists work in the form of a Collective.  This is particularly the case here with Jana & Js who have been painting together since 2006. Together, they create polychrome murals of highly varied sizes. They use the stencil technique (developed among artist-workers within the wca collective), based exclusively on their photographic work. Their main sources of inspiration are cities and their inhabitants. Their paintings moreover include architectural elements or urban landscapes that blend into a portrait. They henceforth focus on nostalgia and melancholy. Having spent some time in Madrid, Spain, where they met, and having lived for a few years in Paris, Jana & Js are now settled in Salzburg, Austria. They embarked on their career by putting their imprint in unexpected spaces, printing stencils on public infrastructures, most often on spaces that are under construction or have been dismantled, such as railroad tracks, old buildings, poles, pieces of concrete, old trucks, piles of wood... They are constantly inspired by the places where they work, trying to decipher the social meaning of urban landscapes. The most striking aspect in their works, however,  is not so much the panoramas themselves, as the people they represent with their existential malaise. They have a singular way of relating to people, their emotions, desires and concerns about their immediate environment. In other words, the urban interventions they create merge, provoking reflection and engaging viewers in an artistic dialogue.
One of the particular traits of Mons is that it has preserved a significant architectural  heritage from the 18th and 19th century. If we take the time to observe the facades of Mons within the walls, we quickly notice that a significant number of these old houses boast peculiar facades with walled windows  -- false windows to be more precise. This typical architectural element, which can also be found in abundance in France, particularly in Paris, appeared at the end of the 18th century following a tax enacted during the French occupation (1795-1815). Introduced by the Directory in 1798, precisely, the tax applies to doors and windows overlooking the streets, courtyards or gardens of buildings and factories, throughout the territory of the French Republic. The tax thus pertains to the number of doors and windows in a dwelling. The inhabitants did not wait long before they simply walled up some of their windows. The people of Mons were no exception. Many street artists have seized the opportunity to make this urban peculiarity to backdrop of their work, as is the case here with Jana&Js. The window is an essential element in the artistic approach of this artistic duo, in fact. The particular feature here is that we do not really know where the fresco begins or ends, to the extent that a subtle narrative game emerges between the architecture, the urban space and the subject of the work itself. We must therefore consider the entire façade as an integral part of a surrealist device that the artists install, where this natural boundary between the real and imaginary worlds is blurred. We ourselves are part of this fresco installed on a street corner, on the first floor of a former dwelling in Mons - the cradle of Belgian surrealism, incidentally. The composition of the image disrupts the sense of interpretation: the view of the façade of the Town Hall, located a few hundred meters away, appears inside the house, on a life-size scale. The window has here ceased to separate the interior from the exterior. Moreover, the two figures in the foreground contribute to this same confusion between dream and reality. Dressed like you and me, we surprise them from the street, within their interior, in a dreamy, melancholic attitude... The pictorial aesthetics is the essence; here, we  realize that what’s important lies elsewhere -- in the imagination...   “The window is an essential element of our work,”  the artists explain.  “Is it an opening onto the physical world or opening to an imaginary, dreamlike, and intimate world, or both at the same time? It is this double opening that we are staging here. In a surrealist game where we see the outside and the inside at the same time. These two windows project us into the city (Mons in this case), but also into the intimacy of these two characters."