The flight of the balloons / 10ème Arte

10eme Arte consists of a pair of young women working in Brussels, one Spanish (Almudena Pano) and the other Italia (Elisa Sartori).  Sartori is a woman with a rich multicultural background.  Born in Italy, at the age of six her father decided to take the whole family to Africa. Aged nineteen, she returned to Italy and moved to Venice to study interior design at the Academy of Fine Arts.  “I’ve realised that it’s very important for me to tell stories to make reality more amusing and charming.  For example, I’d rather tell you my father is Indiana Jones, when in reality he’s just a geologist.”  She has now been living in Brussels for a few years, where she enjoys writing children’s books, giving art workshops and publishing illustrations for newspapers.  She is a secondary school teacher.  “10eme Arte is a project that gives me a chance to develop my illustrations in my own way and to collaborate with my very good friend Almudena.”
Almudena Pano was born in a small village in the Pyrenees.  She studied advertising and public relations at the Universidad Complutense de Madrid and, dealing with the world of advertising she soon came up against what she calls a “big moral problem”.  “My values make me want to touch people, make them laugh and think: I didn’t want to help to build what I consider a very superficial environment.”  Today, she lives in Brussels and is an author and illustrator of children’s books and comics. “10emeArte is a project that lets me create projects with a different approach to space, the public and the purpose of images, while of course allowing me to work with my soulmate Elisa.”  These two women form a collective of artists deeply rooted in our world, communicating to children but touching adults as well.
The folklore of Mons was a revelation for these two young women, who were especially impressed by the enthusiasm of the public, the real actors in the “Lumeçon” combat.  A cluster of faces is all that is exhibited here, with a diverse assortment of styles, ages and genders.  But what is even more striking to witness in this performance is the way in which the audience and the actors in the combat share the same spirit, zeal and enthusiasm.  The second panel above complements the fresco showing balloons taking off in the sky, with a strangely similar physiognomy to the crowds gathered on the ground: a symbol of freedom and lightness.  This fresco symbolises the public’s enthusiasm in Mons and, in particular, the remarkable way the balloons take off after the dragon swings its tail after arriving in the Grand Place. The procession of actors and the dragon follows a very specific route:  it starts from Saint Waltrude Collegiate Church  and goes down Rue des Clercs to the Grand-Place.  During this journey the dragon will swish its tail three times, and has one chance to release a bunch of multicoloured helium balloons. This is a late addition to the procession storyline, dating from the end of the Second World War.  The multi-coloured balloons taking off into the sky provide an emotional moment just before
the dragon begins its long journey through the jubilant crowd gathered on the Grand Place; the balloons’ flight is a positive sign of freedom... 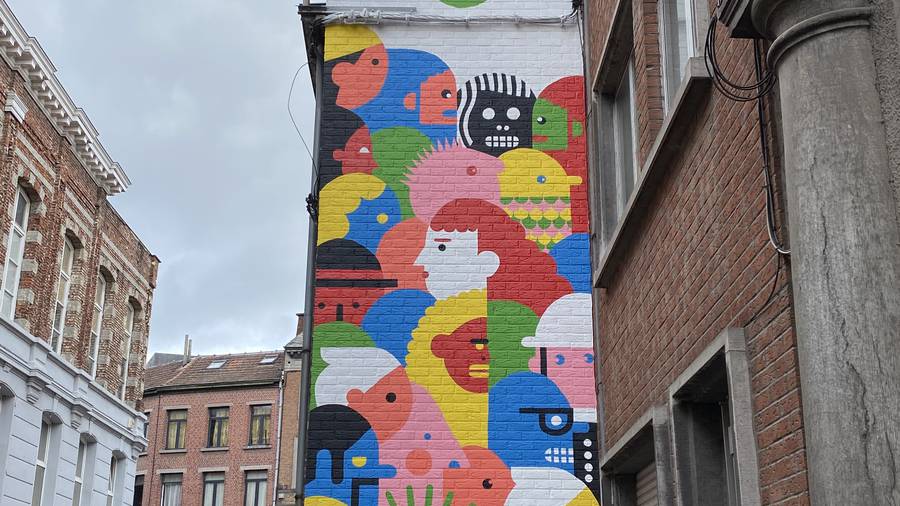