Céleste Gangolphe moved to Brussels recently, after an initial professional career spent in Paris at L'Express (a weekly news magazine).  She now specializes in drawing, painting and creating murals. Céleste Gangolphe oscillates between different graphic styles, which enables her to adapt her compositions freely  depending on the specific features of the project. Most often, she creates giants, sometimes androgynous, to whom she attributes soft and inspiring postures.
Passionate about motifs, Gandolphe works with textures and materials and integrates textile prints, wallpaper and mosaics into her work. Attached to drawing, painting and collage, she uses these mediums to create fragile and sensitive images that can find their way in public space.
For her, it is always a matter of adapting to a place and to those who live there, while trying to create a universe that challenges and tells a story.
She likes to set up street installations and to put imaginary characters, often half-man half-woman, into situations, decked with colourful patterns, close to textile prints and wallpaper.

Here is a plant fresco invading a front wall right in the middle of the city. Mons is a mineral city, so any plant contribution is visually very striking on this street which connects the train station to the pedestrian thoroughfare. Céleste Gangolphe pays tribute to the Leaf men and children of the Doudou festival.
Some of these characters are buried in this rootstalk ivy clinging little by little to the cracks in the bricks of the wall. In addition to the magnificent work of texture and material that develops in shades of shiny green on the facade, the artist has also managed to integrate into this camouflage keys to interpretation that only a sharp and informed eye can decode. For the artist, this fresco deals with the relationship between Man and Nature that is ubiquitous in the battle known as Lumeçon.
In addition to this essential relationship between Savage and Civilized in the Ducasse, another important theme is implied through this fresco: the lineage that has handed this myth down for generations and generations.
The children's Doudou festival, which is held one week after that of the adults, has over the years become an essential and determining key moment for this living heritage that has been adapted to our temporary society.
Also known as the Savages, the Leaf Men support and guard the dragon's tail. There are eight of them. They literally pull the dragon's tail out of the audience with each stroke. They are dressed in green jackets and pants covered with leaves of ivy, about 1500 to 2000 in number.
They are sewn by hand with black thread in the days leading up to the Ducasse. The Leaf Men and Children wear a long conical hat that falls back behind his head, and is covered with leaves too. The Leaf Men's shirt is red like the lapels of their jacket and their tie is yellow. Their green clubs with red spots complete their outfits to give them the strength and power of Nature, which diminish as the Battle rages.  As they are gradually stripped, the jackets reveal an original drawing of a club on a leaf, on the chest pocket and on the back. 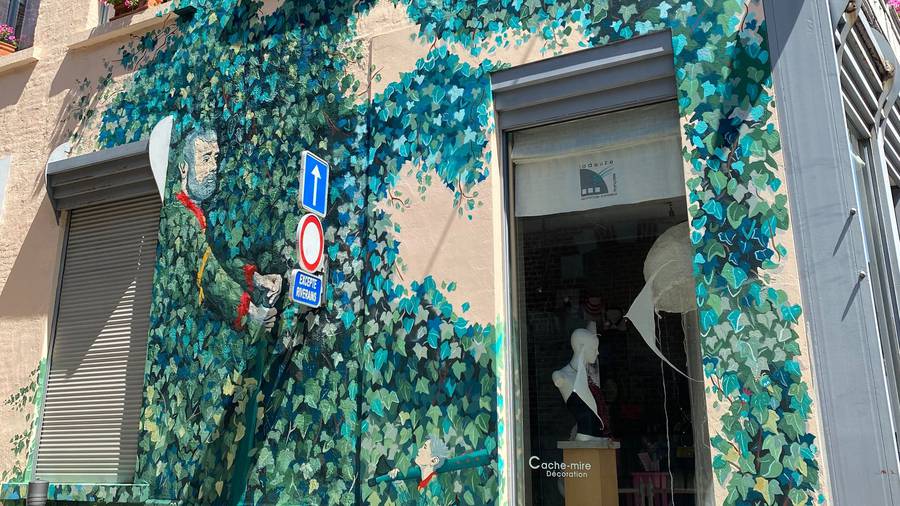