The work:
Inspired by the coat of arms from the village of Hyon, Danaé Brissonet chose the unicorn as the central piece of the mural for its powerful incarnation of purification and healing. The work culminates in the centre of an intriguing and disturbing environment to heal the being that rides it. It purifies their heart by giving them back their vision of colours, told by a rainbow that comes out of the rider's flower-head. In this strange period of movements and transformations where we must adapt and allow ourselves to change, the unicorn is the ideal archetype to tell the story of this singularity and give hope for healing.

The artist:
“Danaé Brissonnet” is an international artist from Quebec, Canada, specialising in public murals, illustration, the manufacture of masks and puppets. Her most recent collection of coloured and fantastic works of folkloric inspiration is scattered across Mexico,
Puerto Rico to Morocco, and also in India and Spain.
Creating imaginary worlds for the spectator, her work invites further reflection on the power of symbolism, myths and metaphors. Brissonet’s artwork reinforces the link between her work, herself, and the audience it engages with. Even more importantly, her process consists of getting involved in communities where she can tell stories of people, their land and their culture. Wherever Brissonnet creates, there will likely be a workshop where she can share her experience.
She looks for places where art is inaccessible and finds it important to work with children to inspire them to paint their stories with the materials they have at hand. Brissonet’s professional work is what allows her to travel to conflict zones and rural communities. Leaving a colourful trace, her art has a feeling of accessibility because she visually translates her story and that of others. Brissonet’s work exists as an impression of change and inspiration for places which, according to her, need it the most.” 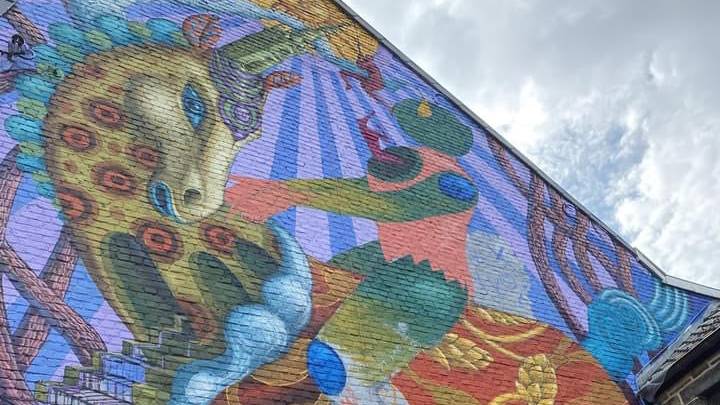