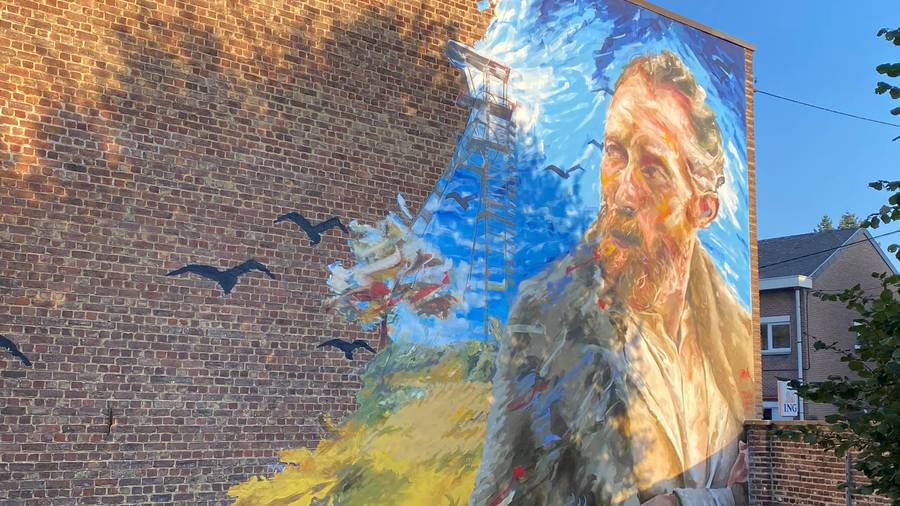 Corentin “Spear” is a Belgian painter born in 1988.  He graduated from La Cambre and attended evening classes at the Royal Academy of Fine Arts.
He participates in group exhibitions in Europe and presents his work in solo exhibitions.  Many cities call on his services for street art.

To create the Van Gogh fresco in Cuesmes, Spear first became interested in Van Gogh’s life and in particular his time in Cuesmes.  Van Gogh was very close to the people and the majority of his subjects are from a working class background.  He didn’t paint the bourgeoisie.
Spear recognised himself in Van Gogh’s vision of society and in the subject chosen for the fresco.
During his stay in Cuesmes, Van Gogh was close to the miners because of his evangelist mission.
Spear therefore wanted his fresco to have a link with the mining world, hence the head frame visible in the background.

In order to draw inspiration from Van Gogh’s world, Spear went to the Van Gogh Museum in Amsterdam to find inspiration for the composition, colour palette and touch that so typify his work.  The work in Cuesmes is based on the 1890 painting “Wheatfield with Crows”.

“For me, the creation of this fresco was a nice blend between Van Gogh’s painting and mine. The work involving materials and touch was particularly interesting to develop and even though Van Gogh essentially isn’t one of my main references, I found this project great fun and it allowed me to explore new things as a painter”.