Location of the artwork: 5 Rue de la Halle, Mons
Hell'O is the name of a duo of Belgian artists, Jérôme Meynen and Antoine Detaille. Stemming from the world of graffiti, they have left behind lettering and spray cans for paper, paint, ink drawing and installation. Together, the two artists are progressing within a rich and intriguing graphic universe, which is constantly developing, multiplying references. Strange animals, small characters and asexual creatures harken back to the fantastic world of fables and fairy tales. Their compositions also evoke a surreal and dreamlike world, mysterious and disturbing, through themes such as cruelty, optimism, failure, hope and death. The works of this duo of artists have been featured in some  twenty solo exhibitions, including one in 2018 at the BAM (Beaux-Arts Mons [Mons Fine Arts]) and some thirty group exhibitions, in Spain, Belgium, the United States, France and China, among others. Originally from Mons, these two artists consider  themselves first and foremost as muralists who take over a wall like a painting. Their artistic approach is situated on the edge of street expression and an extension of the museum's picture rails, to be more precise, which constitutes the premise of their originality. We are without question before an optimistic and positive work that exudes something extremely soothing and introspective, which is felt in front of this fresco, yet fragmented into 16 rigorously identical squares, without any imposed sense of reading: "The wall and its sixteen supports, which are independent of each other, are worked in such a way as to make the spectator travel through time and the different styles: figuration, abstraction, references to time, modernism, classicism…” the two artists explain. Faced with this car park architecture, they respect the diversity of plans and materials to the full. They just underline a square rhythm in the facade which they invest with 16 colourful plans – all with finesse and in harmony with the architecture. The unity of the 16 frescoes is expressed through the colouration of harmonious, synthetic pastel hues on the one hand; and in the fragile, light and graphic technique of the drawing on the other. It is nonetheless interesting to note peculiarities in the way the figures are stylized, such as the asexual body that stretches without any volume. The figures are at times limited to a head or two legs that lengthen in the shape of a lace. In other, more abstract squares, it is the vanishing lines that evaporate into space without ever asserting a background in relation to a foreground. In colour harmony, the flat areas confirm the wall dimension. Finally, in this 16-panel composition, only two of the intervals are identical and are grouped together next to each other as if to form, it would seem, a fixed gaze of two stylized eyes placed in the middle of the architecture. The eye is an essential graphic element which has acquired a central place in most of their work over the years. This fresco from Mons is no exception. They see the eye as the representation of life in its simplest expression which is self-sufficient with no need for a body or a head -- only the eye exists. For its part, temporality becomes fluid in these semi-figurative organic forms that stretch and are arranged on the surfaces without interruption, without force or tension -- just a visual extension that asserts itself on the flatness of the surface, refusing any illusionist effect of depth or any mimetic rendering of reality, proposing instead a timeless meditative repose for the gaze. 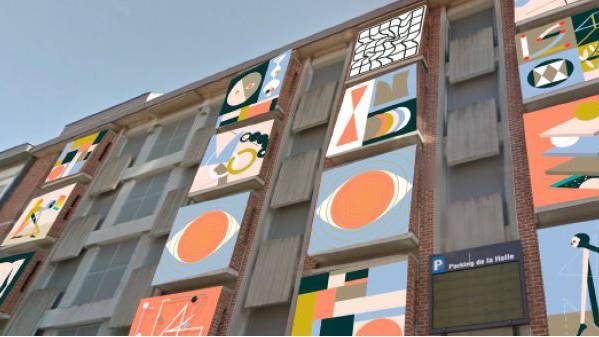