Boris Grégoire is someone who is continually mulling things over. He has always lived in the Borinage region and now lives in Quaregnon, he has
a special attachment to his region. He is a native, a child of the slag heaps. The sight of these slag heaps shaped his vision of the country in which he grew up and
he decided to cast their impression. The hut placed on the impression on the floor represents the act of re-inhabiting former industrial places and is also a reminder of the place where the work of art can be found: the Parc lnitialis.
“There or elsewhere, it makes no difference, it takes its meaning from wherever it is, the impression reflects the contours of its environment, in the present and in memory of everything. The first of a possible series of pauses that make us question our origin and territory. A buoy or a bollard torn from the ground, it draws our attention to the beginning or the end of an eternal change. By this simple, almost primitive act, planting the soil with his grain, his stones to find or rediscover his identity. Being able to land where you are not expected, like a rock, beached along the street, forever more transforming and occupying the landscape. Integration of the surrounding building sites, with no aesthetic rituals, evidence of the present.” 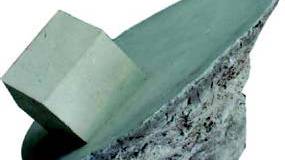