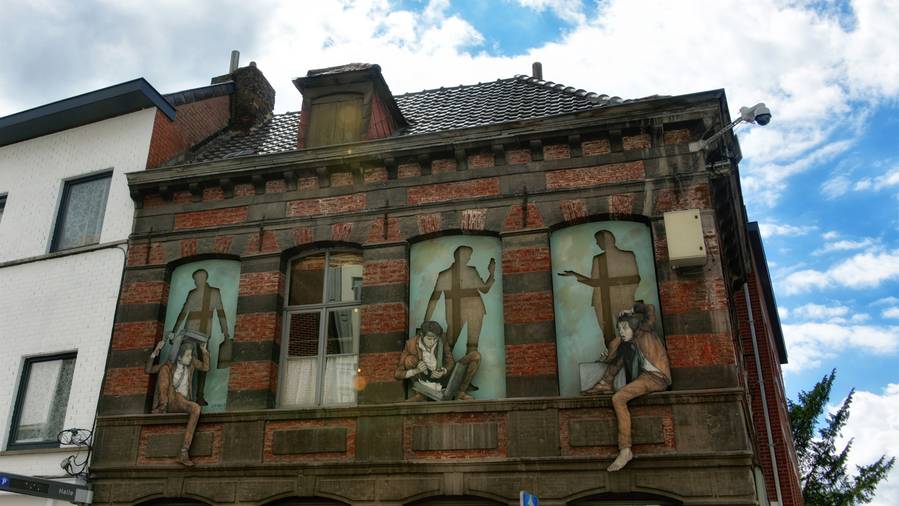 Charles Leval, known as Levalet, was born in 1988 in Epinal. He grew up in Guadeloupe, where he discovered urban culture and was introduced to the plastic arts. He continued his studies in visual arts in Strasbourg. Oriented towards video at the time, his work was nourished by an assiduous theatrical practice, the visual and narrative language of which is preserved in his urban works. He earned his degree in 2012, the year in which his work began to assert its place in the streets of Paris and elsewhere. In 2013, he embarked on exhibiting in galleries and on taking part in international urban events. Levalet's work is geared primarily to drawing and installation. He stages his characters drawn in Indian ink in the public space through a playful visual and semantic dialogue with the present environment. The characters interact with the architecture and unfold in situations often bordering on the absurd. The work is mesmerizing because of the technical mastery shown by the artist. These preliminary studies are carried out with Indian ink – a technique that does  not allow for any imprecision. The outright black line is freed in the attitudes and movements of the characters that literally invade the windows of the façade. Between realism and surrealism, the artist stages confusing anachronisms. The work is more of an installation than a mural, as the artist capitalizes on the different planes of the façade to set the scene for his narrative. Each sketch functions as a real lamination of the space with at least three levels of reading, whereby each level is totally disconnected from the next. The three scenes reproduce the same pictorial scenario: a background of wild nature from which a grey silhouette emerges with a half-statuary, half-modern look that replicates itself on the foreground in trompe-l'oeil. Our first impression here is of  natural gestures of almost living figures installed just on the window sill, only to grasp upon closer scrutiny that the attitudes are inspired by prehistoric men dressed in modern costume. The three windows together offer the viewer a burlesque sketch of the history of our western society: "This installation," explains the artist, "allegorically and humorously evokes not only the extent to which modern man has become unsuitable for a potential return to the state of nature, but also the fact that while the civilized world has greatly changed our environment, the deep nature of Homo sapiens remains the same as in prehistoric times". The artist is unawares making a kind of parody of our time in the very place where this story of man's gradual withdrawal from nature emerged. UNESCO recognition of the Neolithic site at Spiennes, a municipality in greater Mons, is actually based on the sedentarisation, extraction and exploitation of mining and finally on the specialization in the making and exchange of flint tools. Isn't Lavalet’s fresco the very foundation of our present society in the midst of a crisis?