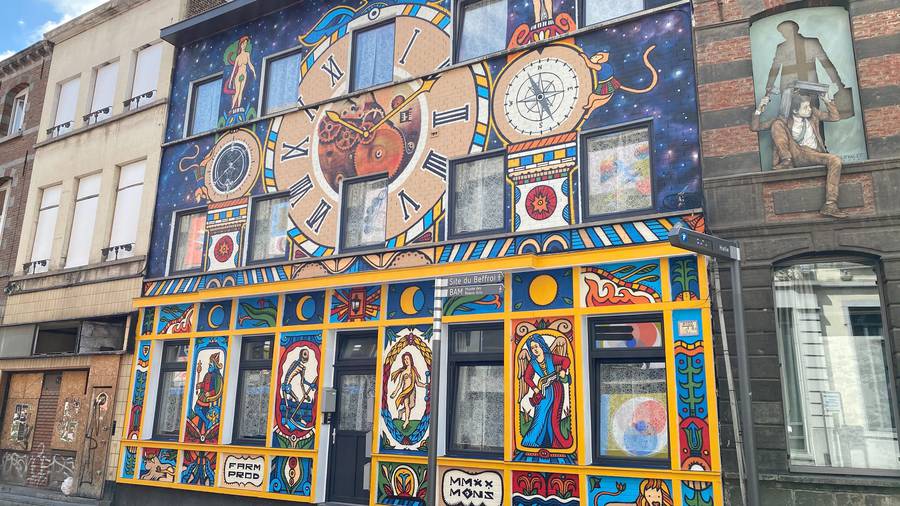 FARM PROD is an art collective that brings together several visual artists around various creative projects, based in Brussels since 2003. Coming from the same artistic background, each member has developed their own skills over time. The team now includes painters, graffiti artists, graphic designers, web designers, illustrators and videographers. For 15 years, these different artistic forces have been jointly organising and involved in socio-cultural events in Belgium and abroad. The team has always had an affinity with graffiti/street art culture and it was when they were invited to the Kosmopolite Festival in 2008 in Paris that they really started to develop projects in this direction. “These references are open to interpretation,” the artists explain. For them, it’s about creating a journey through time by asking questions about the evolution of humanity. That said, the meaning of the Major Arcana Tarot cards is oriented towards self-awareness. This is a concrete and personalised aid that tells somebody about themselves and their opportunities to develop. In this state of mind, all the magic surrounding this fresco evokes a memento mori of our times. “Remember death”. This terrible sentence gives voice to our conscience and dissociates two dimensions of existence: that of the everyday world, just as we are now in front of this depiction, and that marked by our awareness of our finiteness, of our death. Never before has this maxim resonated so strongly with us; more than ever, it reminds us of the fragile nature of life. This fresco is very impressive because it is integrated into the whole façade of the house. Complex from an iconographic point of view, it is subdivided into two parts, one celestial dominated by Adam and Eve, the other recreating symbolic figures from the Tarot cards framed by a plant decoration. Among these characters, we recognise that the highlight of the fresco is in “The Lovers”, symbolised by Adam and Eve. They stand over the dials, which can be identified as a barometer, a clock and a compass, all three of which have been depicted in a very realistic style, with allegories of the “Wheel of Fortune”. In a nod to Mons, there are monkeys clinging to the edges of the dials. The alcoves along the bottom, from left to right, contain: “The Emperor”, “Death”, “The World” and “Temperance”.