-A +A
Home / Interview with Laurent Busine

Co-curator of the exhibition

What was the starting point for the exhibition Man, Dragon and Death: the Glory of Saint George?

The legend of Saint George is probably the most widely represented story in the Christian, principally Catholic, Western world. Initially, I was guided by a desire to understand why. We have identified some 1,500 representations of the battle between Saint George and the dragon, and there are many, many more. These depictions required great keenness on the part of the artists who worked on them. Painters and sculptors were confronted here with a fundamental issue: they had to oppose two fictitious subjects in a battle against one another. The first and obvious fiction is that of the dragon, which no one had ever actually seen. It is nevertheless precisely described, in Cesare Ripa’s iconography, for example, as being winged, with a serpent’s tail and claws. It is a composite creature and has to be monstrous. As we clearly do not know the specific details, each artist invented them in his own manner.The second fiction is that of Saint George, as that too has no precise historical anchor point. The imagination and creativity of the artists are put to the test, and we observe an extraordinary evolution in the representationof the legend’s central figures. 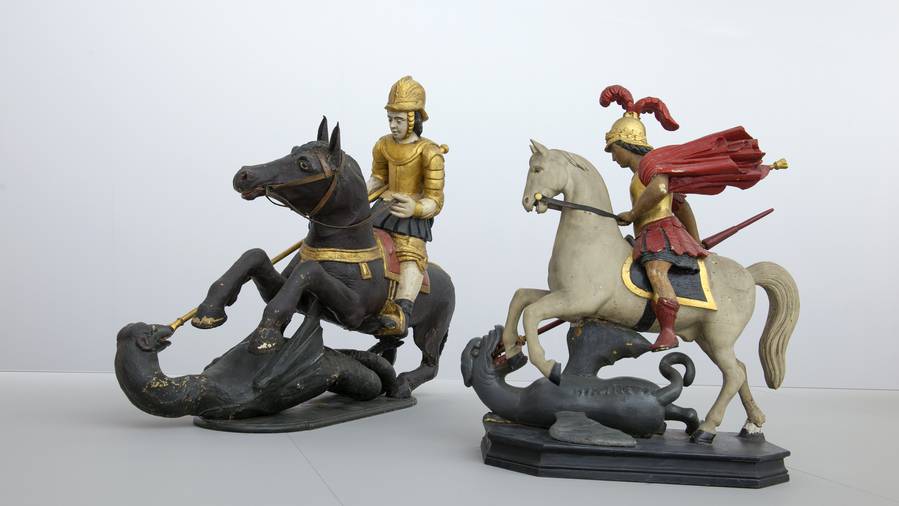 Can you say more about that evolution?

At the outset, the dragon was a “compositecreature”, but following the Crusades, it becamea crocodile. In Palestine, the Crusaders saw immense creatures whose jaws were lined with teeth, and they returned from their journeys with crocodile heads to prove to the populations here that the dragon existed. I know of two, in fact, one in Mons and the other in Karlstein in the Czech Republic, and there were certainly others. The same goes for Saint George. In the 14th and 15th centuries, he resembled a soldier. He was depicted wearing armour, with a chainmailcoat, a breastplate and a helmet. By the late 15th and early 16th centuries, he had transformedinto something of a dandy. So we have now shifted from active chivalry and the Crusades to the Renaissance, duringwhich Saint George was sometimes coiffed with a feathered hat and fought the dragon very nonchalantly. Consequently, at the outset, the representations were very physical, as Saint George was the patron saint of theCrusaders. In this particular case, the battle was even assimilated into the battles they fought against the infidels who controlled Christ’s tomb and the holy sites in Palestine. The red cross on a white background on the crusaders’ flag is none other than the flag of Saint George, which is in turn the flag of the resurrected Christ.

Saint George and the dragon are each connected with different places in the many existing representations. These places have great symbolic value.

The dragon lives in that which is not fixed, in the unformed: undergrowth, marshland and caves. There is a very beautiful painting by Uccello that does not feature in the exhibition, but which enables us to clearly understandthis. On the left, we see a cave, and on the right, there are square, perfectly delimited fields. Saint George is on the side with the fields, as he is also the farmer. “Georg” means labourer. He is the one who created the fence between what is cultivated and the “uncultivated”— the civilised and the non-civilised. There is also a very beautiful painting by Mantegna depicting Saint George triumphant, simply standing with the dragon at his feet. The dragon’s tail echoes the sinuosity of the path leading back to the town. Suddenly the dragon has departed from the unformed and is slowly transforming.

Fiction and reality seem to be perpetually connected in the story of Saint George. Was this an important factor in your view?

Absolutely. I was interested to see how we can shift from the legend to the myth. Between  the two, the nuance is sometimes tenuous. The legend is above all the translation into words, images and formulas, of a story which has a particular impact. In the 13th century, Jacques de Voragine’sThe Golden Legend combined all of the disparate elements that had already existed about Saint George to form the basis of his story. The myth is far more wide-reaching. We know that before being defined by de Voragine, Saint George had earlier appeared in the figure of Perseus, who, on his horse Pegasus, saved the unfortunate Andromeda from being eaten by a seamonster. Saint George is also in the character of Horus, even earlier still, who killed an evil creature and—why not?—in Hercules, who vanquished the Hydra. The mythical figure of the man, of a god or a hero in the Greek sense, who had to confront a monster that was threatening someone or some group, has constantly been recurring throughout history. Nowadays, we find Saint George in the figures of Superman, Spiderman, Batman and the like. Children watch the story of Saint George on television all the time. They don’t realise it, but perhaps when youngsters in the 14th century saw a painting, they had no idea they were looking at Horus. That’s disturbing.

How did you incorporate works by contemporary artists into the exhibition?

I asked Luc Tuymans, Angel Vergara Santiago, David Claerbout and Giuseppe Penone to revisit the myth of Saint George, rather than the story of Saint George. The works they proposed are clearly very far removed from the older forms of representation. For example, David Claerbout’s video does not speak directly about Saint George, but of any imaginary place where a fairy tale might be set. Penone is presenting a recumbent bronze tree trunk. Water is flowing from a handprint, placed where the trunk divides into two, and returns into a bottomless well. That tree is horizontal, close to the ground like the dragon. Alongside it is a second tree, some ten metres high, which was struck by lightning. The part that was ripped apart has been gilded by the artist. We therefore see the horizontality of the dragon and the verticality of Saint George. Angel Vergara Santiago created a video about a sculpture of Saint George which is in the neo-Gothic church of Sint-Joris in Antwerp. Vergara’s hand intervenes between the camera lens and the work, as he redraws the sculpture and elements of the architecture. Luc Tuymans, for his part, has donated a very strange painting, which is 3.8m wide, to the museum. Painted in shades of grey, it depicts four or even five people leaning on a balustrade, almost like shadows. They are in fact looking at the panorama of the Battle of Waterloo—yet another image. The painting shows people looking at a painting, while beyond it, there is the landscape where theactual battle took place, now empty, but which was a real place of combat. It is an important work in the exhibition, as it speaks of what we are all doing now: we are looking at old images distanced from their original places and purposes, images which represented another battle. This painting offers both a spatial and a temporal perspective.

Quite. The status of the 15th and 16th century paintings in the exhibition has changed. I would fundamentally question whether anyone ever kneels down in an exhibition gallery. However, when these works were displayed in churches, the faithful kneeled before them and prayed. The Saint served as an intercessor between God and man. Nowadays, these works are no longer objects of devotion, but documents of our history. What interests me is how, during a period in history, Saint George was found in churches, in castles and afterwards in objects. The exhibition includes such curiosities as small insignias of pilgrims, rosary beads, devotional images and very popular miniature sculptures. Wefind prestigious art and popular art alongside each other, works before which people came to pray. We certainly did not have to go very far to find representations of Saint George: there are several in small churches within a radius of some ten kilometers from here.

Why did you name the exhibition Man, Dragon and Death?

Because it is the story of every courageous man who has taken a decision and has been stronger than fate. Fate intended that the young girl should be devoured, but Saint George, through his act of courage, transformed that destiny. The story has been adapted and altered to correspond to myths and Christian rituals, but it remains the story of a courageous man. One possible interpretation of the myth would of course be to envisage the human position in relation to life. 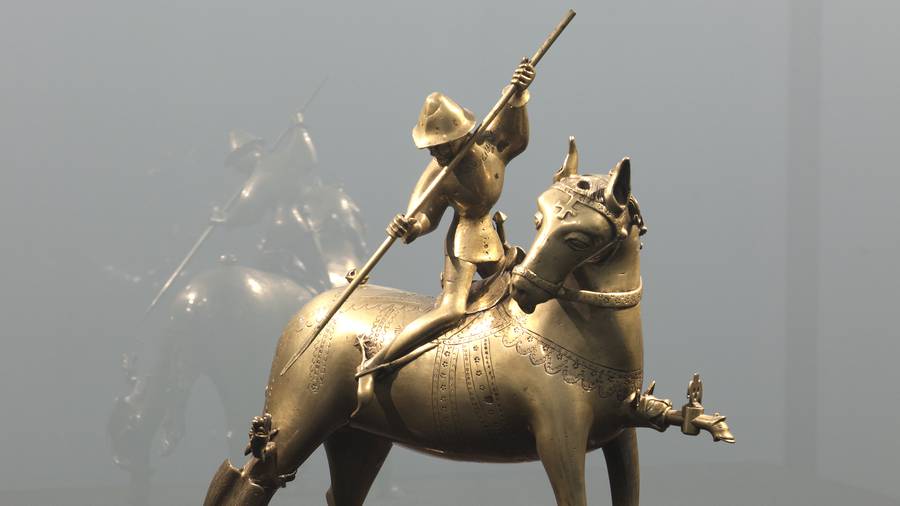 Can you cite a few of the old works which will be presented in the exhibition?

There are extraordinary pieces from the Uffizi in Florence, the Kunsthistorische Museum in Vienna and from Nuremberg, as well as very modest pieces that recount the same story. I have made a conscious effort to combine them, rather than placing the major works on one side and the minor works on the other. There is, for example, an engraving by Lucas Van Leyden in which the king is saying goodbye to his daughter. From the 16th century, there is a large painting by MichielCoxcie in which a townsman has had his portrait painted, dressed as Saint George. The Emperor Maximilian had previously done the same thing, so it was a sign of prestige. He draws strength from Saint George, rather like children who dress up as Spiderman. Suddenly, they are inhabited by Spiderman’s strength.

The episode of the battle with the dragon had a real impact, and was therefore endlessly reworked as a means of impressing people.

For a long time, it was the story of the martyrdom that was important. Saint George’s was the longest martyrdom of all the saints. The fight with the dragon was introduced much later and supplanted the martyrdom.

Popular faith prefers the battle, which is more active and extraordinary. Probably that is why we all say that we have our dragon to kill somewhere…It is curious that there are a lot of local stories around here, in this region. In the Borinage, there is Gilles de Chin, the story of a nobleman who went on a Crusade.

The legend of Saint George was made profane when Gilles de Chin fought a foul creature in the marshes of Wasmes, with the help of a little girl. The story continues to be told today, there is still a “procession de la Pucelette” every year in the village. In Mons, the fight between Saint George and the dragon is re-enacted each year, on Trinity Sunday. Similar events take place in Portugal, Italy and Spain.

The purpose of the exhibition is to show how, during a precise period in the history of art and the history of our civilisation, a certain image became the symbolic embodiment of the righter of wrongs, because thefundamental question of inacceptable evil and the courageous man who fights against it is a story that captivates all of humanity and will continue to do so.

Co-curator of the exhibition and director of the MAC’s at Grand-Hornu.