-A +A
Home / Blog / Who has forgotten the second floor?

Who has forgotten the second floor?

While many of you may have passed through the porch of the town hall to enjoy the Jardin du Mayeur or the Musée du Doudou, you may well not have stepped inside this magnificent building to discover the treasures that it has been hiding for the last 500 years.

And come to think of it, that’s quite understandable, as you’d need an official guide to be able to go into the splendid rooms of this gothic jewel.
But for the more observant among you, there are a few details that will arouse your curiosity in the entrance straight away: a carved stone just underneath the balcony, which once no doubt supported an overhand, cornerstones marking the beginning of a second floor that was never built, a large folding door…

visitMons - Grégory Mathelot
For the carved stone, it’s quite simple; it once supported a small balcony from which the deputy mayors used to announce to the good people of the city – the lucky so-and-sos – the new taxes that would have to be paid.
The cornerstones would have supported an extra floor, like in the town hall in Louvain, the cousin of the one in Mons. Unfortunately, there was not enough money, so this storey was never built. Personally, I like this building as it is.
As for the triple folding door, it takes the people who pass through it on a journey back in time, giving them the chance to imagine what it would be like to be in the 15th century, bracing themselves at night to go through the smaller door, taken by surprise by the guards posted on the other side…
And there were plenty of guards if we are to believe the number of stone seats inside the first room. They were extremely vigilant, those men who had the privilege of guarding the keys to the city every night.

The marriage of ancient and modern

But you were no doubt hoping to creep into the Salle des Mariages? I know you so well! The panelling taken from the Chapelle Saint Georges is decorated with sculpted hearts, it was an omen… And the fresco adorning the edge of the room is a lovely tribute to Mons’ historic heritage and folklore. We don’t know where to look.

visitMons - Grégory Mathelot
So, come on… On your tiptoes. If nobody sees us, we can climb up to the majestic gothic salon. Gothic, yes, definitely, but with a very modern twist: the wax painting of the dragon is a strange thing that raises questions, and I love the slightly incongruous touch in what looks like such a stunning historic venue. 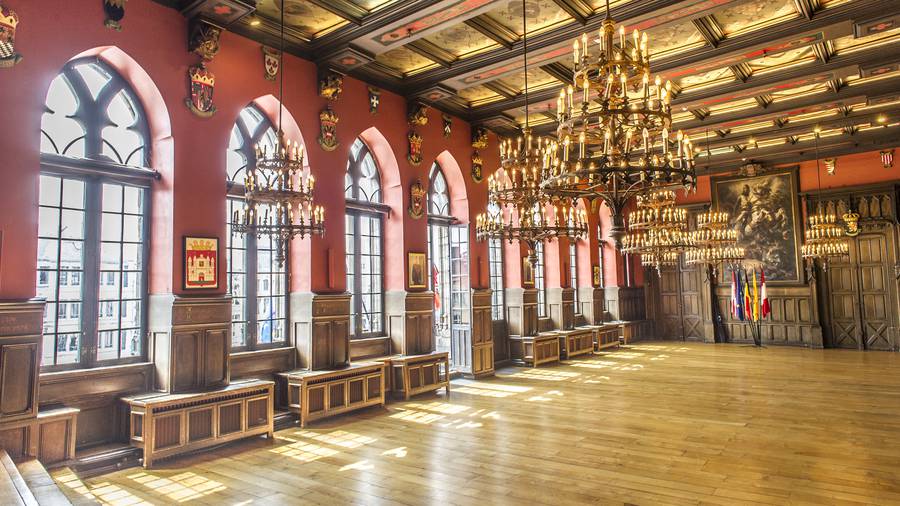 visitMons - Grégory Mathelot
And if we edge forward just a little bit, we’ll end up in the Salle au Parapluie (the Umbrella Room, because of its ceiling, yes, yes), and its photographs depicting the battle between the Man and the Beast. Contrasting colours and shapes, it’s a striking, surprising installation, and all the better for it.

If you thought your tour of the town hall would be a boring experience, full of old furniture and ancient rooms, you’d be sorely disappointed! And I haven’t finished yet…