-A +A
Home / Blog / The restoration of the Belfry

The restoration of the Belfry

The Belfry has been making us wait, but this spring, we’ll be able to climb up inside once again!Like me, you have probably been wondering why it has taken all this time to finish the restoration work. To find the answer for you, I met Richard Benrubi, the city’s former technical services director. Richard Benrubi supervised the 30 years of restoration work on the Belfry.

Richard, why did the work on the Belfry take so long?

Firstly because there was a lot of restoration work that needed to be done, and the costs were enormous. Before then, only one major restoration project had been carried out since it was built. That lasted 17 years, between 1846 and 1863, and only involved the exterior and stability to a certain extent. And then, I don’t think that we had appreciated the extent of the work that was needed. In the 1960s, everybody knew that it was in a poor state, but nobody imagined the extent to which it was under threat.

Until the largebanner fell into the Parc du Beffroi…

Yes, that was in 1965, it fell during a storm. This was the first warning sign. In 1976, it was the stone console that supported the first balcony that broke and fell into the park. I had been the technical services director for a year, and I said to myself that something really had to be done. We arranged for a survey of the building to list all of the problems, then we tried to raise awareness with the authorities. But it wasn’t an easy decision to make, the money had to be found and we had to ask the French Community for millions of Euros in subsidies. You don’t renovate a belfry like a house. In 1980, we started a major urban renovation project. Won over by what we were doing, the French Community’s heritage director looked at our case. In September 1983, she rang me to tell me that she was going to grant us the budget to start work on the Belfry! 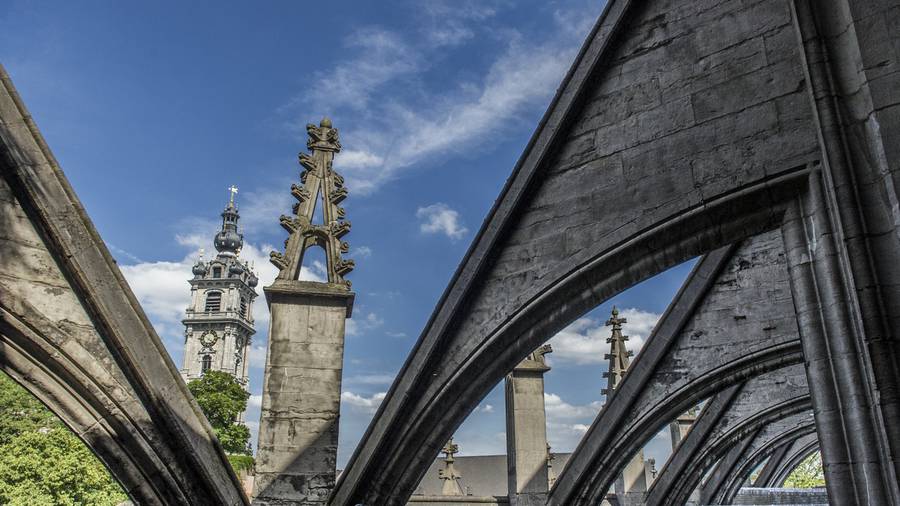 No, of course not. But I didn’t think there would be so much work either. In 1983, we had to start with the most urgent jobs. We repaired the roofing. It took us a good year to complete the initial phase. The process had begun and we had a vision of what was required.

But to restore such a building completely, we had to do it in phases, quite simply to get the subsidies gradually over time. We had a series of surprises that slowed down the work, but to be honest, it was more the lack of funding and administrative problems that extended the time it took. The plans had to be changed several times. Today, I honestly think that we should be delighted with this renovation work. Our Belfry is set for several hundred more years, we’ve done a good job.

What does the Belfry represent for the people of Mons?

The Belfry is part of the family. Two days ago, a neighbour called out to me in the street. She was confused because the clock was being worked on, and she always relied on the Belfry to know what time it was when she went shopping. A lady also told me one day that she had fled to France in 1940. When she came back, years later, she wept with emotion when she saw that the Belfry hadn’t been touched by the bombing during the war.

Since it was built, it has never been damaged by war?

No, at least not seriously. However, a lot has happened in this Belfry!It was used as a lookout post during the First World War. At the end of the war, the Germans were requisitioning metal and they wanted to take the bells. To save their precious jewels, the people of Mons agreed that concerts could be performed during the Occupation. And then, on 11 November 1918, the day on which Mons was liberated, the bell ringer, Fernand Redouté started to play the Doudou, the Marseillaise and God Save the Queen at 5 o’clock in the morning. I can just imagine the feeling of euphoria in the city. Until recently, the siren in the roof lantern alerted firemen to outbreaks of fire. It was taken down 7 or 8 years ago.

Do you have any stories you can share with us?

This Belfry has always been part of our day-to-day lives. It was even taken hostage once! In the 1950s, in the midst of the School War, students shut themselves inside and unrolled their banners. In 1962, when the Cuban crisis was raging, once again, students got into the Belfry and triggered the siren. Some locals thought that war had broken out!

In a few weeks, the Belfry will be reopening its doors, with a cutting-edge Interpretation Centre. How do you feel about that?

I’m proud of the work that has been accomplished. This Belfry has been the project of my career. I retired three years ago, but I still attend site meetings. On 4 April, a new chapter will begin, but I’m happy about that. I hope that the people of Mons will appreciate the chance to take back their landmark.