Have you sometimes asked yourself about the secrets behind some of the street names in Mons? So have I! So I’ve been investigating. Several authors who were also curious got there first. I was particularly reliant on Les Rues de Mons, by Charles Rousselle*, published in...1882 (we’re not that old, but the names haven’t changed much since then).

Why did we choose these street names? A short anthology, organised into themes.

Rue des Gades: This is one of the oldest streets in the city. In the Borinage dialect, “gade” means goat.
Goats? In a city? Well, yes, there used to be a pond at the bottom of the ramp leading up to the castle, where herds of goats would come to drink. The city wasn’t as built up back then, and animals were free to frolic around…
Rue de la Biche: Since 1650, it has had the name of the Hôtel de la Biche (biche is French for doe), which had taken up residence there. Recently there may have been a stag wandering around here, looking for his sweetheart. 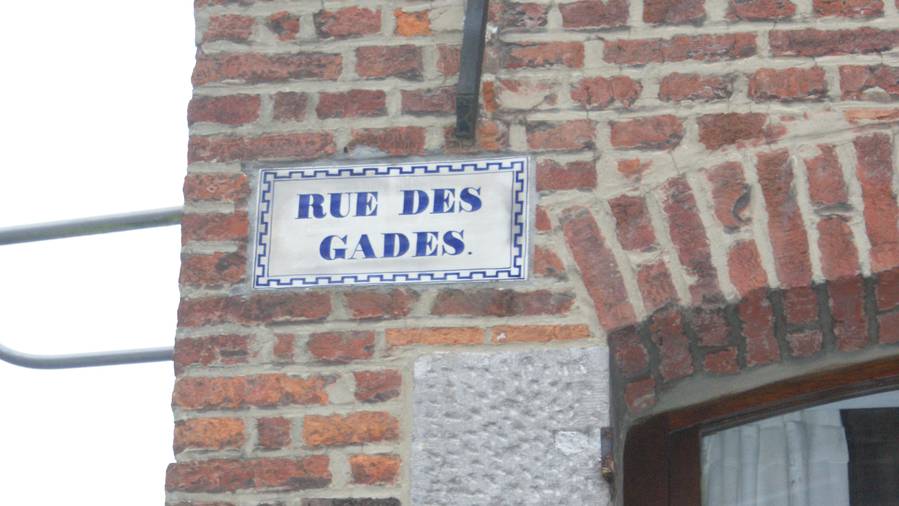 Rue des Archers (archers), des Arquebusiers (an arquebus is a type of firearm), des Arbalestiers (an arbalest is a late variation of the crossbow), des Canonniers (cannoneers)...
Personally, I find it really hard to tell the difference between them all, so I’ve come up with a new name, “arquebulestriers”. But seriously, these names bear witness to the battlements that surrounded Mons until the end of the 19th century, when they were dismantled. But the names have remained, and remind us that the battlements were there to defend the city. It was here that soldiers were posted to protect the town.

Rue Cronque: In the dialect of the Borinage, cromb (combe or conque if it’s feminine) means wonky or crooked. The street does indeed follow a zigzag pattern. This narrow road used to link up the Château des Comtes (which is no longer there) to the Grand-Place. As they say in the Borinage: Il a éncrongoyémé il avale drwo (it has a twisted neck, but it swallows straight).

Rue des Trois Boudins: This road used to be close to the Traubourdin barracks, which were here until the 18th century. The people of Mons, always ready to give people nicknames and twisting words, didn’t hesitate: so the Traubourdin became TrauBoudain (three puddings in the Borinage dialect). Residents of the Rue des Trois-Boudins don’t mind at all. In Mons, everybody knows, the girls are all gorgeous…

We’ll look at other street names in the next instalment …
Curious about the origin of a street name? Post your question here!