11 of them carry the dragon from the Belfry for his battle with Saint George. Dressed in white from head to toe, they accessorise their outfits with a wide black belt. They are the White Men, the loyal allies of the Dragon. And I’m lucky enough to be able to meet one of them.

You’re an actor in the battle. What does your role as a White Man involve?

The White Men carry the dragon. It’s really quite an unassuming role, as we only exist through the dragon. We are his “legs”, as some people like to remind us... The role might seem a bit frustrating. During the battle, we never have any direct contact with members of the public. But actually, it’s through the dragon that we interact with them! Without us, the dragon wouldn’t be going anywhere ;-) 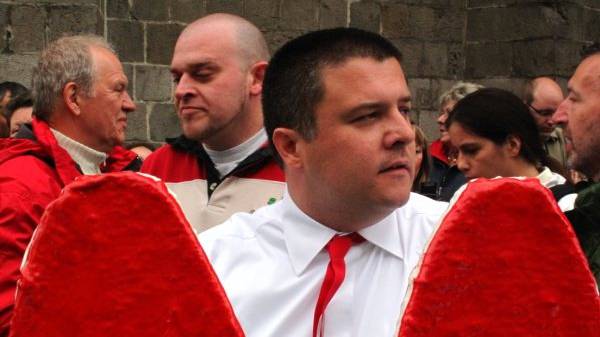 How and why did you become a White Man?

To begin with, you don’t choose a role. When I was 18, when I applied, I wanted to be “an actor”, it didn’t matter what the role was. I have to admit, I didn’t have much hope when I signed up, as I hardly knew anyone in the group. But I said to myself, “If it doesn’t happen, at least you won’t regret not trying!” As Mr Dusse said: “Forget that you’ve got no chance, go for it!” ;-)
Then, little by little, I got to know one, then another; and I start to believe that maybe there was a chance I’d make it.

To start with, I was put on the list of Devils, but I wasn’t selected. As one Chin-Chin said at the time: "If he’d become a Devil 1, I would have asked them to put a tractor under my Chin-Chin 2 body so I could pull it out of the sand!" It’s true that this role didn’t really suit my physique...
In 2005, I was named second reserve for the group of White Men. I took part in my first battle in 2009.
And the role suits me perfectly. To move the biète, or the Dragon3 , you need to be a tight group, you have to put all your strength together to do it; and that’s something that really matters to me!

[1]
Another actor in the Lumeçon, an ally of the dragon (Evil)

[2]
Another actor in the Lumeçon, an ally of Saint George (Good)

[3]
The beast, known as the Dragon 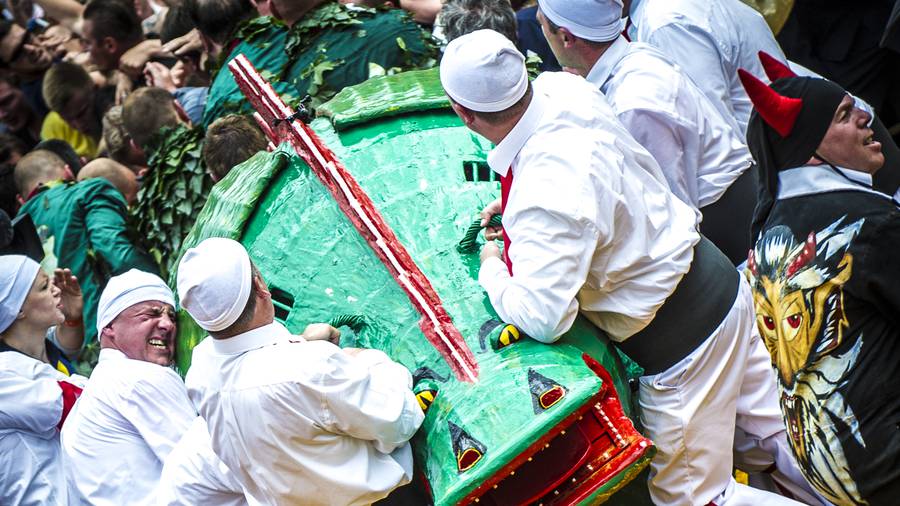 How can you become an actor in the battle?

You have to be at least 18 and have lived (officially resided) in Mons (in Greater Mons) for at least 15 years without a break. Then you can collect a sponsorship form from the Service des Fêtes. You have to find a sponsor from among the Actors in the Lumeçon 1, and three sponsors from four groups: the Fire brigade, the Police, the Procession Committee and the Municipal Council. After it’s confirmed that you fulfil all the criteria and your application is put to the Collège des Échevins, you become a Candidate for the Lumeçon. But nothing’s definite! You become a reserve. When a serving actor stands down (usually because he has reached the age limit), a replacement is appointed.

How do you prepare for the battle throughout the year?

Throughout the year, we organise different activities to make sure the group is tight knit. Some focus in particular on the children of the “actors”, others on families, and others just the “actors”. The Actors’ Ball is a high point, we all get together as we organise it ourselves, every single aspect of it. There are also meetings 3 or 4 times a year. And then there are all those times when you just bump into each other in Mons (over a pint), or meet up or whatever.

They’re all like part of the family now.
I’ve become really good friends with some of them. Several “actors” sponsor the children of other “actors” (that’s true for me too!).
Generally, apart from July and August, not a week goes by when I don’t spend some time with someone in the group, and there are “official” activities every month!
As the Doudou gets nearer, we have a few preparatory meetings, in our different groups, where we go over the different parts of the performance. And a week afterwards, we have a debrief. We go over how the days went and talk about what could be improved. 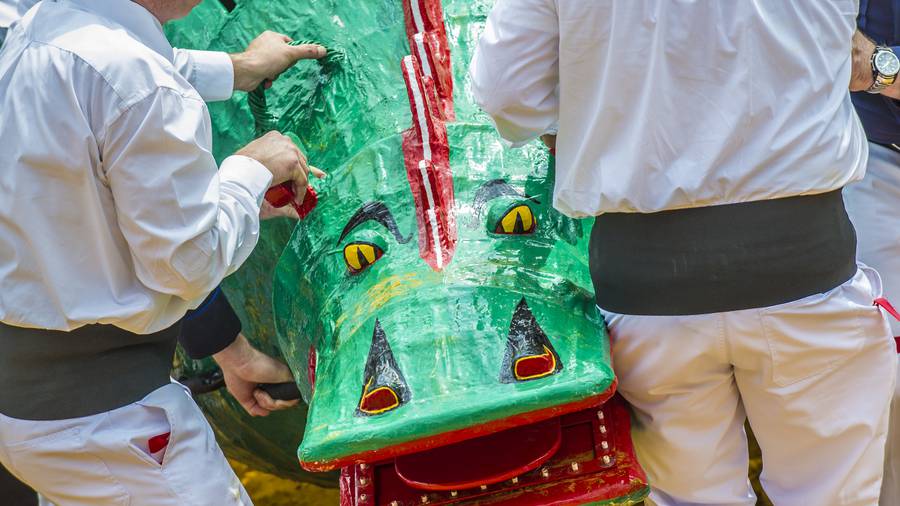 What’s your favourite part of the Ducasse?

There are so many highlights in the Ducasse; but I think the moment that I find the most moving is when the dragon stops at the top of Rue des Clercs, when Saint George greets the public and starts the Descent. You wait for the firemen to fire the shot that brings the characters in the Lumeçon to life, and all the actors wish each other luck. It’s really very emotional. You have butterflies in your tummy. You’re aware of what you’re about to do, and you know perfectly well what you’re going to experience. Personally, at that moment, I’m inside a bubble. I find it really hard to smile even… And yet it’s one of the highlights of the Ducasse!

Can you tell us any stories about the “battle”?

A few years ago, I was inside the dragon during the battle. I was told (one White Man has to tell whoever’s in the dragon what’s going to happen next; because you can’t see anything when you’re inside) that we were going to overthrow the Chin-chins. My role at that moment was to hold up the body of the dragon and be the pivot around which it would turn. So I could sense the dragon launching itself, the tail fell down, picked up speed, and then I felt an impact, I could hear a muffled sound, the dragon started to vibrate all over and the wicker started to crack. We had obviously touched something! At the speed the tail was moving at that moment, it must have caused some damage. There was a brief moment of shock, and then I heard Bertrand, another White Man, say: "Don’t worry, it’s only a Policeman 1!" And it was a Policeman, that was all ;-)! Remembering it makes me smile because Bertrand is a policeman himself! After the battle, he explained to the others what he meant: “Don’t worry, it’s only a Policeman, and it’s his helmet that we touched!” But the guy really had been hit, and his helmet had broken in 2! 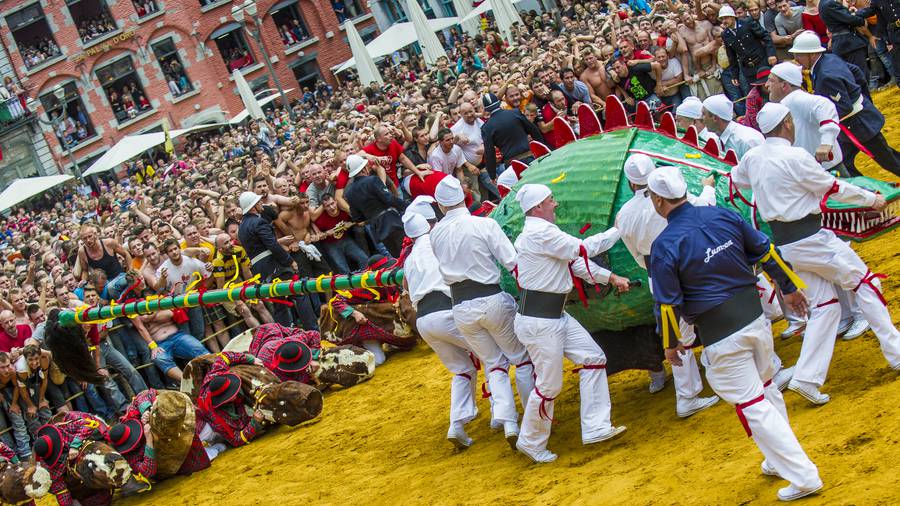 What advice would you give to a visitor who has never been to the Ducasse and who would like to experience it?

I think the best advice I could give would be to be a chambourlette 1! If you’re invited, accompanied by a local, they can tell you what you’re going to see (although you still have to make some choices because you can’t see everything in one year!), and explain what’s happening.

Personally, I’ve always been interested in folklore in general. But I’ve only really got into other folklores when I’ve experienced them with somebody. For example, I only really understood the Carnaval de Binche when I went with a Gille, or the Ducasse d'Ath when I experienced it with the locals. I’m sure that’s the only way to really get to grips with it (because it’s really all about the emotion of the event), rather than just being there as a rwétant 2, with no extra explanations.

[1]
A chambourlette is a guest of a local resident during the Ducasse.

[2]
In the Borinage dialect, a rwétant is someone who’s happy just to watch