It happened a few days ago. Olivier Tournay, otherwise known as Mr Saint George, kindly met with me to talk to me about his passion for the Doudou and tell me all about what goes on behind the scenes of the fight that he has with the dragon every year in the battle known as the Lumeçon.

Olivier, how long have you played the part of Saint George ?

It’s been five years already! I took over from my cousin, Frédéric, who had played the role for 10 years. I had played the Devil for 17 years, and when I was asked if I wanted to take on the role of Saint George, I accepted straight away. It was a childhood dream come true. The Doudou has been part of my life since I was tiny. My grandfather, Aramis, was Saint George for nearly 30 years, then my uncle, then my cousin, and finally me… I grew up with the Doudou. Lots of my happiest memories of childhood are connected to the event. I can still see my grandfather on his horse in the middle of the arena. I go over all the conversations that were had about the battle. It was a week that the whole family looked forward to every year.

So Saint George is a family affair?

Yes, the role of Saint George has been in the Tournay family for 60 years, he’s been passed down from one generation to the next. My grandfather was a jockey. That was the main reason he was given the role, they need to find a good horse rider. He passed down the role to his son, who in turn passed it down to his. When my cousin stood down, it was only natural that I took on the baton. Today, I’m delighted to see my son, Victor, play the part of Saint George in the Petit Lumeçon. I’m very proud of him. 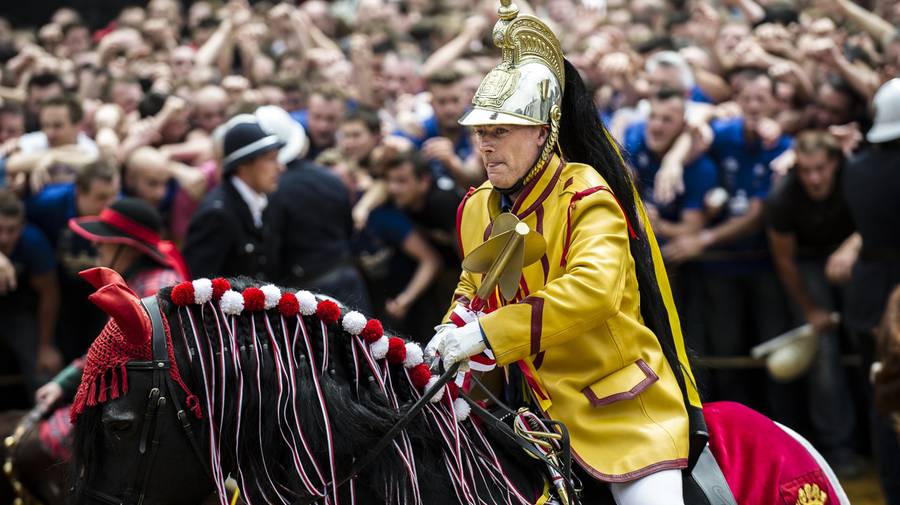 Everybody talks about Saint George, but not that much about his horse...

That’s true. And yet, without my horse, I’m nothing! When I took on the role, I started to look for the perfect horse to help me with this role. It had to be a Friesian, preferably a stallion for its bearing, one with spirit, but also well-balanced. After a few trials, I fell in love with Rio. As soon as I climbed onto him, there was a connection. And now we’ve been fighting the Dragon for 5 years.

Does the battle require a lot of preparation?

Gosh yes! I train virtually every day. Starting at the end of January, I rehearse with Rio. I train him, I show him the dragon, the ribbons. I tame him. It’s a long game. You don’t put a horse in the middle of a crowd that’s going wild just like that. You have to be well prepared. But it’s fascinating. At the end of January, when my horse sees that I’m bringing out a dragon, he stands up straight. It’s as though he’s saying to himself: that’s it, we’re off, it’s time for the battle! Over the years, I’ve seen him play up to the cameras, he poses. He was made to be an actor!
And then there are all the preparations to do with the outfits. My wife helps me a lot. She makes a few pieces for my outfit and the horse’s. Not to mention my son’s! Because Victor is in the Petit Lumeçon!
We have several rehearsals with the group before the Doudou. Each year, the story changes, we’re always trying to improve the show. On the day of the battle, I get up at 4am to prepare my horse and do some exercises.