Get back to nature on one of the RAVeL routes

An abbreviation of “Réseau Autonome de Voies Lentes” (autonomous network of slow routes)in Wallonia, the RAVeL network is the equivalent of France’s Voies Vertes. On a beautiful Sunday morning, it’s a real pleasure to travel along one of these old railway lines or towpaths, now set aside for walkers, cyclists and horse riders. 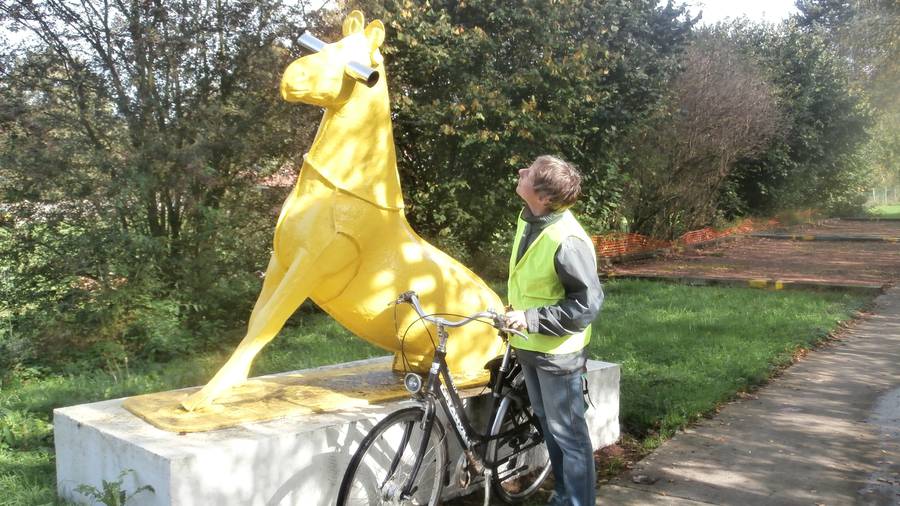 You can see how nature has reclaimed what was rightfully hers: a perfect green setting for a walk!The routes are mostly flat and they’re ideal for a safe, easy excursion. Some locals have even adopted them, as you’ll be able to see:on the old line 98c, between Frameries and Hornu, near Quaregnon, you might be surprised to come across some locals playing pétanque!You might be mistaken for thinking you’d wandered into the South of France. Take the time to join in, or have a drink with them if they offer you one.

As for me, after a bit of camaraderie, I carry on my way, and notice some strange yellow sculptures – are they horses?I can’t resist the temptation to sit on one… The workshop that made them has launched an ambitious project as part of Mons2015 called “Tomber volontiers dans le panneau” (literally, be happy to fall into the trap), (http://www.blancmurmure.be/).

Are you coming to the launch on 30 August?I’ll be going by bike!

In the opposite direction, towards Cuesmes, and more specifically La Malogne, (http://lamalogne.wordpress.com), there are some old chalk quarries. Our land is like a piece of Swiss cheese!No surprise that some areas cave in from time to time.

In a word, there’s plenty to see on our RAVeLs. 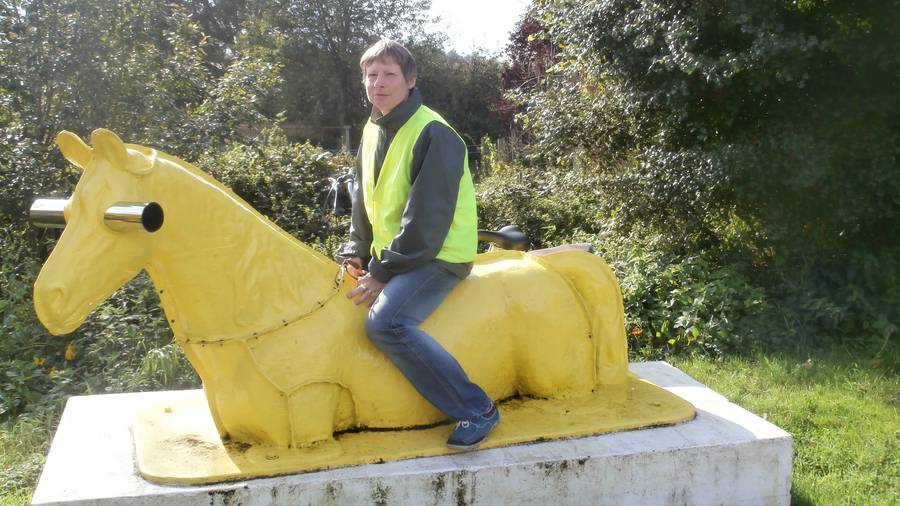 And if you don’t have a bike, don’t worry! The Maison des Cyclistes has a great selection and next year, there are going to be a dozen electric bikes too. How exciting!

In the summer, it really is worth having a go on a RAVeL Beau Vélo route:they are put on every Saturday from the end of June to the middle of September and bring together thousands of cyclists on each leg in Wallonia and Brussels on routes that are around 40km long. At the finishing line there are free concerts to keep the crowds entertained for an hour. It’s a real party!If you want to keep track of what’s happening, you can follow the presenters from Vivacité (Walloon radio station) on each leg.
A great way to feel like you’re on holiday every weekend…