In the Grand-Place, in a matter of minutes, you’ll be travelling through time. 500 years of history – let’s explore together...

Let’s start our tour with the town hall, right in the middle of the square, one of the finest in the kingdom it has to be said! This monumental collection built in 1479 has undergone countless modifications up until the last century. But you should know that it is unfinished: it was supposed to have a second floor...
Between the first and the second windows, to the left of the porch is a little squatting monkey made of wrought iron. For every good native of Mons, he’s called “L’singe du Grand Garde” (the Guardhouse Monkey). The origins of this little creature are unknown, but folklore has it that stroking his head with your left hand will bring you good luck. You know you’ve got to take a photo don’t you? If you’re interested in heritage, I can recommend a tour of the different rooms in the town hall, and a walk around the Jardin du Mayeur, which you can get to via the porch. Another unforgettable journey awaits

Façades from every era

But for now, let’s stay in the Grand-Place. Opposite the town hall, on your left and at the start of the pedestrian street (Rue du Miroir), two façades painted red date back to the 16th century. The gothic former Hôtel du Miroir, nos. 15 and 16 (Restaurant Palma d’Oro) is one of the oldest buildings on the square.
Diagonally across from no. 27 and the corner of Rue d’Enghien, the brand new Office du Tourisme has flung its doors wide open for you. The building with its stone façade has just been restored, and dates back to the middle of the 18th century.
Lastly, for a great way of enjoying “La Montoise” (the local beer), in moderation of course, try the Copenhague Tavern at no. 11 (opposite the town hall). This building has also just been restored, finishing off the makeover that the square has enjoyed. The Art Deco inspired windows (following in the footsteps of the original design) give this façade its unique appeal. The first floor offers a wonderful panoramic view of the Grand Place. 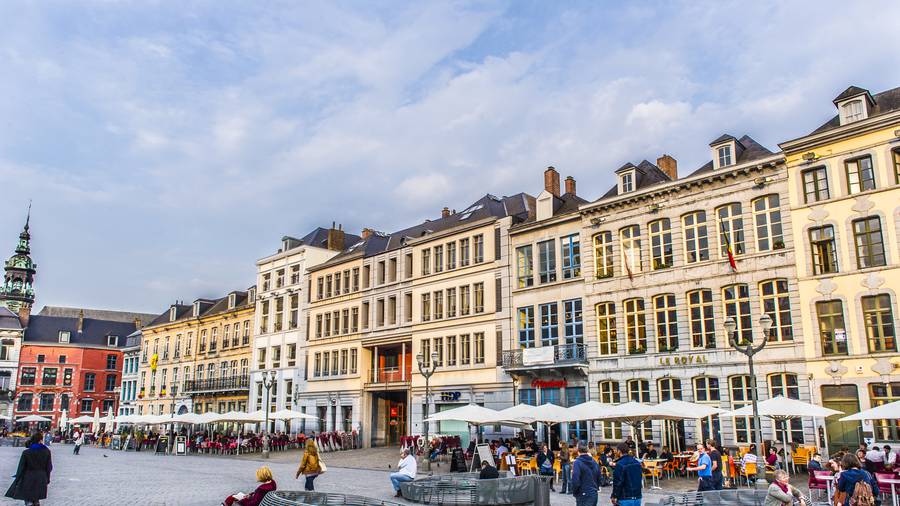 Grégory Mathelot
So all eras live happily side by side! As your gaze wanders from right to left, you can marvel at a number of jewels of Mons’ architecture: the Théâtre de Mons (1841) whose historic roof has just been given a 21st century twist, the old Maison Saint-Christophe and the Toison d’or from the 16th and early 17th century (nos. 21 and 22), the official Mons 2015 shop, the old Chapelle Saint-Georges dating back to the early 17th century, to the left of the town hall, now an exhibition space, and last but not least, the former Hôtel de la Couronne Impériale (1766 – 1772), which is currently being used as offices.

Time flies by, with six centuries of history going by in record time!