Saint George against the Dragon... The climax of the Ducasse Rituelle

Saint George against the Dragon... The climax of the Ducasse Rituelle, the battle, known as Lumeçon, takes place on the Grand'Place in an atmosphere filled with elation.

The parade along Rue des Clercs

12:25pm on Trinity Sunday. The procession is over. The Car d'Or has climbed the Saint Waudru ramp and hauled itself into the church. The protective mother of the city is safe. The bells of Saint Waudru ring out and the Air du Doudou can be heard from the belfry. The time has come. The time for Saint George and the Dragon to make their way down Rue des Clercs. The two legendary figures will play out their battle on the Grand'Place. Thousands of locals await them. They wouldn’t miss the event for anything in the world. Saint George comes first, closely followed by the Chin-chins, responsible for protecting him. Police officers and fire-fighters wearing period costumes make sure that everybody is safe. Everybody meets in the arena, worked up into a frenzy worthy of the greatest gladiator battles.

A battle choreographed with military precision

For 30 minutes, Saint George and the Dragon circle each other, the first guided by his protective Chin-chin, moving clockwise, the second, moving in the opposite direction, carried by 11 white men, with its tail carried by 8 leaf men. Around them, the 12 Chin-chins protect Saint George from the 11 devils armed with cow’s bladder balloons. Each one knows what he has to do to lead his master to victory. The battle is tough. The spectators cheer them on. Their cries ring out in all four corners of the square. But contrary to what you think, all this “disorder” is in fact very well organised. It is all choreographed with military precision. The actors, people of Mons from all social and professional backgrounds, spend the whole year rehearsing the battle to make sure it is faithful to tradition. Some wait for years to be given a part to play. 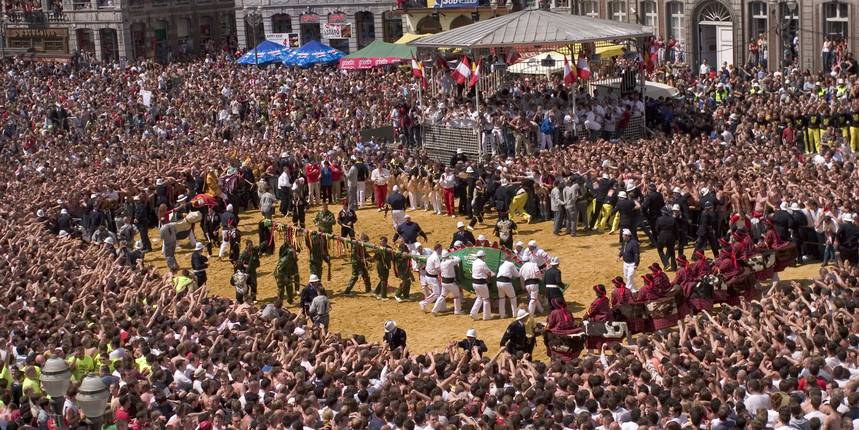 The people of Mons on the front line

The spectators also take part in the event. Characters in the battle in their own right, they clamber to grab the Dragon’s main. The devils and the Chin-chins fight each other and challenge the members of the public around the line. This moment of harmony is rare. Social barriers disappear. It doesn’t matter who wins. Saint George always manages to be the victor. He strikes it with his lance first, and then a sabre, before shooting the Dragon three times to bring it down. More than just the victory of Good over Evil, this ritual game, whose origins date back to the 15th century, epitomises a strong feeling of reconciliation, bringing the people of Mons together. While the Lumeçon characters make their way back to the town hall, the crowd invades the arena, chanting “Et les Montois ne périront pas” (and the people of Mons will not perish). Everyone wants to take a little token of the battle home with them: a piece of Saint George’s lance, a cow’s bladder balloon, a bit of the Dragon’s tail...