With more than 140 works, the exhibition entitled Ici tout est possible is the first major retrospective devoted to the artist’s work in Belgium. The public will have the opportunity to explore the career of this extraordinary visual artist. The exhibition will occupy two floors of the museum and chronologically trace the artist’s creative evolution, from her first assemblages and paintings of the 1950s to the famous "Tirs" of the early 1960s, including her sculptures of brides and parturient women from the mid-1960s and her Nanas, an ode to femininity, which have remained symbolic of her work. Models, preparatory sketches and plans for her outdoor sculptures, including the Nana Maison II, fountains and play areas, models of stage sets, sketches and shoots of her theatrical productions will also make up the exhibition. In addition, her two feature films, her sculptures mixing narrative and dream, and finally her garden of monumental sculptures, Le Jardin des Tarots, in Tuscany (Italy), represented by large models and visuals. 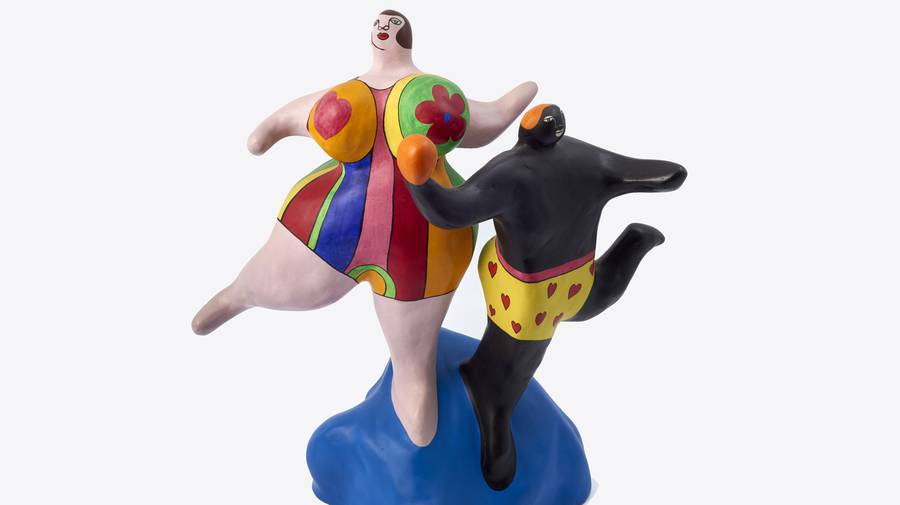 Niki de Saint Phalle, "Baigneurs", 1981.Donation Maurice Duvivier, propriété de la Communauté française, en dépôt à l’Artothèque, Mons © 2018 NIKI CHARITABLE ART FOUNDATION, All rights reserved. Photo : © Atelier de l’Imagier
The exhibition will show that despite the plurality of her approach, the work of Niki de Saint Phalle accurately mirrors her concerns: sociopolitical issues, anger, violence, participation, love, joy, mythology and fairy tales, not to mention femininity. These themes revolve around three focal points. The first one is personal. She viewed art as a subjective meditation, a catharsis as she overcame a personal trial. The second is political. She challenges the patriarchy, religion and politics of her time. The third is more universal. It betrays her thirst for freedom and her desire to transmit joy to those who encounter her work. These three areas defy any chronologies. They reappear as a leitmotif in all her work, even in the same body of work. The exhibition intends to stimulate visitors as they travel along the scenographic route.

For this exhibition, the BAM has worked closely with the Niki Charitable Art Foundation, which will lend some major works as well as archival material. The exhibition will also showcase several well-known works from the collections of the Sprengel Museum in Hanover (Germany) and the Museum of Modern and Contemporary Art (MAMAC) in Nice (France), to whom the artist made substantial donations during her lifetime. The exhibition will also feature notable works from other museums and private collections. The exhibition will be curated by Kyla McDonald (curator of a retrospective dedicated to the artist in 2008 in the United Kingdom for Tate Liverpool). A newly expanded specialised book will be published for the occasion.