A fast-paced Sunday at the Ducasse de Mons

Come and celebrate the long-awaited Doudou with Mons residents and their neighbours!

The Ducasse de Mons is a real institution, very dear to locals, and considered to be one of the major events of the year. For nearly a week, it’s the heartbeat of Mons and its inhabitants, but Trinity Sunday is undoubtedly the most symbolic day. This year, remember to save the date!

Starting the day with a procession

Granted, you have to be early enough not to miss the beginning of the procession that starts at 9.30 am. But just once won’t hurt; on the Sunday of the Ducasse you can make an effort to attend one of the most beautiful (if not the most beautiful!) religious processions in Belgium, which takes place every year for over seven centuries. In total, 1,500 actors will parade in front of you in period costume, reminding us, with music playing, that Mons has always taken pride of place in European history. Sporting the colours and seal of a brotherhood, you’ll see them proudly advancing in groups. Perhaps you’ll recognise a familiar face or two to wave to. However, I can guarantee that all these actors take their roles very seriously, as if they’re inhabited by the character they play, and will not be distracted that easily! Yet the crowd, gathered along the procession route, cheers on the actors like real stars.
Speaking of stars, you’ll also have the chance to see in the procession of Saint George the famous horseman who will fight the Dragon after the procession. And icing on the cake, the Golden Chariot (Car d’Or) will close the march and roll right past you before rushing with all its might onto the Saint Waltrude ramp! 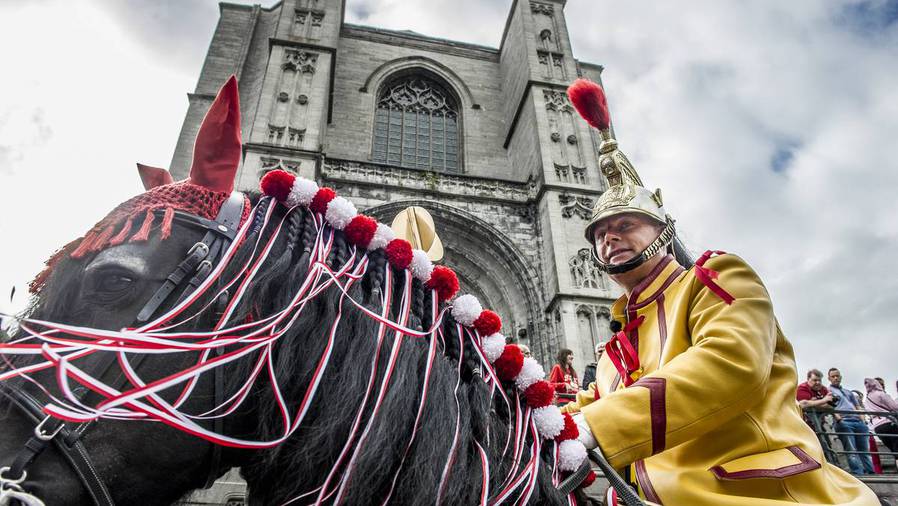 Everyone with baited breath at the rise of the Golden Chariot 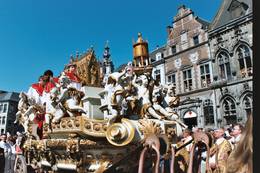 The Golden Chariot is, so to speak, the highlight of the show. On board, around the shrine of Saint Waltrude, you’ll hear a priest read a miracle attributed to the patron saint of Mons in various symbolic places around the city. During these interludes, children, who are also in the cart, place objects given by the faithful onto the shrine in the hope of bringing them happiness.
In the late morning, the procession comes to an end, and the Golden Chariot has finished its tour of the city. Yet last but by no means least, one step remains…

Before finding its place in Saint Waltrude Collegiate Church, the Golden Chariot has to climb the Saint Waltrude ramp. When you see the incline of the road, with all its cobbles jutting out one after another, and you remember the weight of the cart (two tonnes!), you can appreciate how difficult it is! Okay, six workhorses guide the Golden Chariot, but still! But wait…it’s noon and a massive tide of people is rising up behind the cart! Some men have removed their T-shirts and yet you can feel the heat emanating from the crowd. You can see locals at the windows, on the cornices, on the steps of the church. Even TV channels take part in the festivities to broadcast the event. After the excitement (which becomes more palpable minute after minute), it’s time to stop at the bottom of the ramp. People are concentrating, everyone holding their breath. Time seems to have stopped, all you can hear is the tremendous noise of hearts beating in unison. And suddenly, in an emotional moment, the Golden Chariot resumes its course, literally carried away by the crowd. For a moment, the whole city enters into communion and holds a hope. A hope that the Golden Chariot will climb the Saint Waltrude ramp in one go, otherwise the city will get bad luck over the year. Finally, shouts of victory can be heard, immediately followed by thunderous applause! The tension dies down, making way for relief. The city is safe and the celebration can continue in full swing! 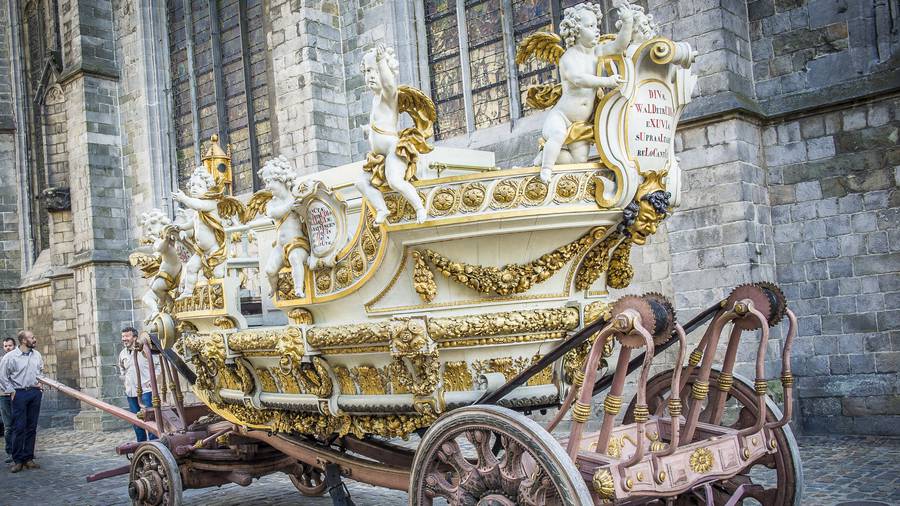 Onwards for the Lumeçon battle

Just after the rise of the Golden Chariot, you can follow Saint George as well as a slew of rather incredible characters descending rue des Clercs to reach the Grand-Place, transformed for the occasion into a huge arena. Fortunately, a path is marked out for them, as the place is already full of people! This duel marks the culmination of the Ducasse de Mons. Even the carillon in the Belfry starts the tune of the Doudou!

So, Saint George leads the way, followed closely by his 12 Chin-Chins. They represent dogs and their job is to protect Saint George. You’ll easily recognise them by their hobby-horses. Don’t be alarmed by the presence of police officers and firefighters; they also have their own role to play in this traditional fight. As for the famous Dragon, it’s carried by 11 white men and held up by 8 men covered with leaves supporting it at the tail.

Thus begins the duel. For half an hour, Saint George and the beast go round the arena, the former in a clockwise direction, the latter in the opposite direction. By the way, this is where the term “Lumeçon” comes from, referring to this circular movement characteristic of snails. Eleven devils are also present. You’ll not be surprised to learn that they belong to the enemy camp and, each armed with a cow bladder, they try to disorientate Saint George. But the Chin-Chins do not fail in their duty as protectors: far from it! Everyone tries to lead their master to victory; it’s a tough fight. The onlookers have nothing to be envious of! Thankfully, a rope holds them back, otherwise they would find themselves in the centre of the arena in no time! Everyone is screaming and trying to snatch a handful of hair from the Dragon’s tail, a symbol of luck for the coming year. You might have more luck grabbing some after the fight, by crisscrossing the Grand-Place.

Contrary to what you might think in the face of so much unrest, the fight is perfectly arranged. Everyone knows exactly what to do and when. What’s more, the battle participants, Mons residents from a range social and professional backgrounds, rehearse during the year so that everything is faithful to the scenario. If you follow carefully, you’ll notice that Saint George, who is initially equipped with a spear (to be broken three times), is then equipped with a sabre and finally arms himself with a gun. The third shot will be fatal for the beast. Well done! Saint George wins the duel, and Good overcomes Evil. The characters in Lumeçon will happily give the crowd a prop from their costume and then move on to the town hall. Now everyone can celebrate the Ducasse as they please.

What about the other days then?

Two days earlier, on Friday evening, the festivities begin with a traditional concert. “Who from?” you’ll immediately be thinking. Well, the stars change from one year to the next. Guests’ names are revealed a few weeks before the Ducasse, but whether you know them or not, and whether you like them or not, the atmosphere alone is worth the detour! The concert is held in the Mons Grand-Place, in the heart of the city, and if you want a seat on the terrace, you’ll have to book several months in advance or count on getting lucky and nabbing one when someone gets up to leave. But don’t worry, you’ll go with the flow of the crowd and as for drinks, the waiters at the bars roam around the square, hands balancing a tray, to come and serve you.
Saturday marks the day of the descent of the shrine and the torchlight procession. For the descent, go to Saint Waltrude Collegiate Church where the relics of the saint of the same name, patron saint of the city, are lowered down under the ever-amazed gaze of the dean, the mayor and hundreds of locals. The Golden Chariot then hosts Saint Waltrude’s shrine and stands ready for its annual departure the next day. It’s also a unique opportunity to hear the famous tune of the Doudou in a collegiate church. Goosebumps guaranteed!

There’s a change of tone for the torchlight procession! People meet at 10.00 pm at the bottom of rue de Nimy (which leads to the Grand-Place). Volunteers, equipped with torches, supervise procession and musicians. An initial group advances but the rest of the procession deliberately doesn’t follow fast enough. The gap widens and that’s when the second group rushes towards the first one. Rest assured, you’re not back in the days of the Vikings who assaulted their opponents! Here again, it’s a nice organised chaos! This “chase” crosses the city, so to speak, before ending in the Grand-Place.

Monday is sale day! Some traders set up shop outdoors, while others make the trip especially for the occasion. The pedestrianised area transforms into an open market and everyone tries to find the deal of the day. You might not find your heart’s desire, but you’re bound to meet some acquaintances who will offer you a drink for the occasion.

Or better still, you may stumble upon the characters from the Doudou who walk the Dragon around the city and gladly hand out souvenirs from the fight!
Finally, Tuesday marks the closing of the Ducasse with a wonderful firework display. It’s the last evening of celebration, so it’s a general tour of the Grand-Place. And as the saying goes: “In v’la co pou ein an!” (That takes us through the next year!) 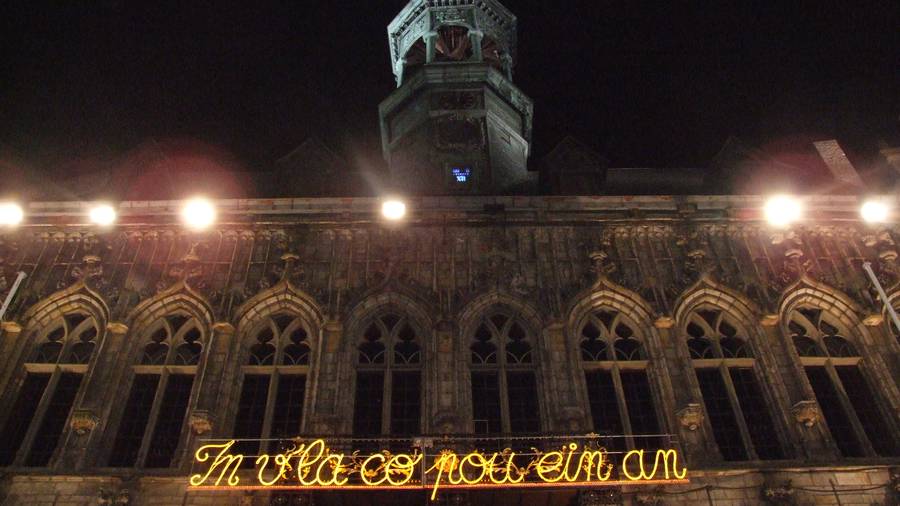 You can see for yourself that the Ducasse de Mons is a full programme. And yet you’ve only scratched the surface. Something else you should know is that the epic battle is once again staged by children on the Sunday following that of the Trinity. Making the fun and games of the Ducasse last a little longer.

In 2005, the Doudou was recognised by UNESCO a “masterpiece of the oral and intangible heritage of humanity”. This event is far more than a time to meet, share and get excited. For a few days, it brings together all Mons residents and breaks down social barriers. And as everyone chants in these situations: “Et les Montois ne périront pas!” (“And the Montois will not perish!”) 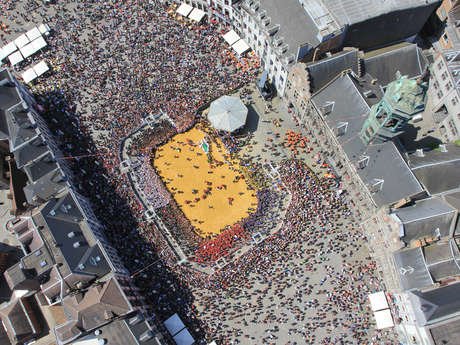 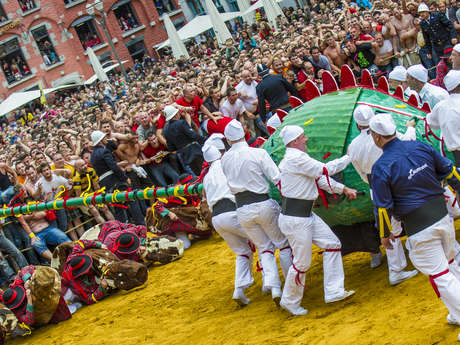 Trips: On the trail of the Doudou 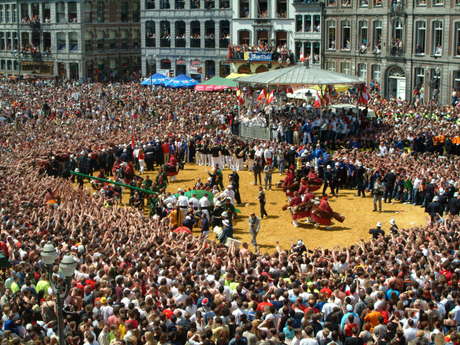