On the road to Mons-Maubeuge, there’s something curious about Quévy-le-Petit. 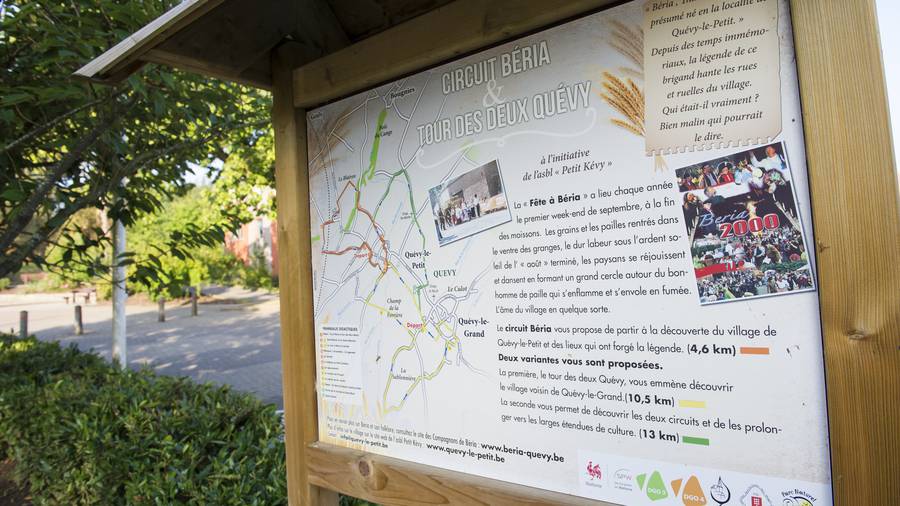 On the road to Mons-Maubeuge, there’s something curious about Quévy-le-Petit. In the village, a convict clad in a prisoner’s outfit stares defiantly at passers-by. This frail man, a mocking character, is not one of the Dalton brothers on the loose from jail. The lout is called Beria, and he is to Quévy what Joe Dalton is to Lucky-Luke fans: an icon!

It is believed Béria Thiméléon Philibert was born on the first Ventôse of 1769. This great big sly-eyed man was none other than a bandit and a prankster who plagued the village of Quévy-le-Petit for more than two centuries. He stole, he cheated, he showed off all his talents to residents. So every year, on the first weekend of September, the people of Quévy tackle the problem head-on and chase Béria right across the village. They arrest him, judge him and burn him at the stake!

From mid-August, strange creatures spring up throughout the village, on the edges of windows and in small gardens. Young and old alike put a face on the famous bandit.
So on the first weekend of September, Quévy-le-Petit lives to the rhythm of this manhunt which is folkloric to say the least. On Saturday, a torchlight march departs to the sound of bagpipes through the paths and alleys of the village, following in the bandit’s footsteps. Scenes are enacted in different locations which are kept secret. The misdeeds of which Béria is accused are explained to the crowd who come in large numbers for the occasion. Policemen, a judge, a lawyer and village women wear period costumes.
Inspired by the news and events that have marked the life of the village, the plot changes each year. The whole march is meticulously taken care of and prepared for months by the Compagnons de Béria association.
On Sunday, the police lock in the cage visiting bandits often chosen from the crowd but it’s at 3pm that everything is enacted. Béria reappears and plays his last trick; the bandit is afraid of nothing! After a few burlesque adventures, the man is arrested at 5pm. He is judged the following day, on Monday, at the end of a procession led by Compagnons de Béria and the villagers. The sentence announced, Bérie is burnt at the stake.

Just who is this famous Béria?  How was the legend born?  Several explanations are put forward. Many see a nod to Moneuse, head of the dreaded “Chauffeur du Nord” who long terrorised the populations of Hainaut. It was at Quévy that Antoine Joseph Moneuse, a famous French highwayman, was arrested on 12 February 1797. Sitting at the Allard hostel with his sidekicks, he was arrested by the constabulary of Mons. Locked up in Asquillies prison, Moneuse was then transferred to Mons prison before his trial. This would lead to his death sentence, despite a sloppy investigation. The arrest, the trial and the execution of Béria during the Quévy festivities recall the fate that awaited Moneuse.
The harvest festival and the questionable attitude of a local farmer could also explain the origin of this tradition, but what was the point? Béria is now above all an excuse to celebrate and to congregate.

Note that the village also has a marked circuit based on the bandit. Over 5 kilometres starting from the cultural centre, walkers will discover different places where the highlights of the Béria festival take place. It’s the opportunity to see how the countryside and rural heritage are preserved here. One route leads to Quévy-le-Grand while other circuits set up by the Haut-Pays natural park in particular also cross your path.

A walking area, Quévy is also a town that knows how to celebrate! The municipality offers year-round festivals and events that bring together young and old. Every year in August the old harvest festival at Blarégnies brings together many enthusiasts and collectors of old farm equipment. Tractors’ parade, draught horses gathering, etc. For more than 30 years, the harvest festival of Blarégnies has been a must. Another get-together not to be missed: the humourous race which has been taking place every year at Blarégnies on the weekend of the Assumption - for over 40 years!